Even arsenic is okay in small quantities. 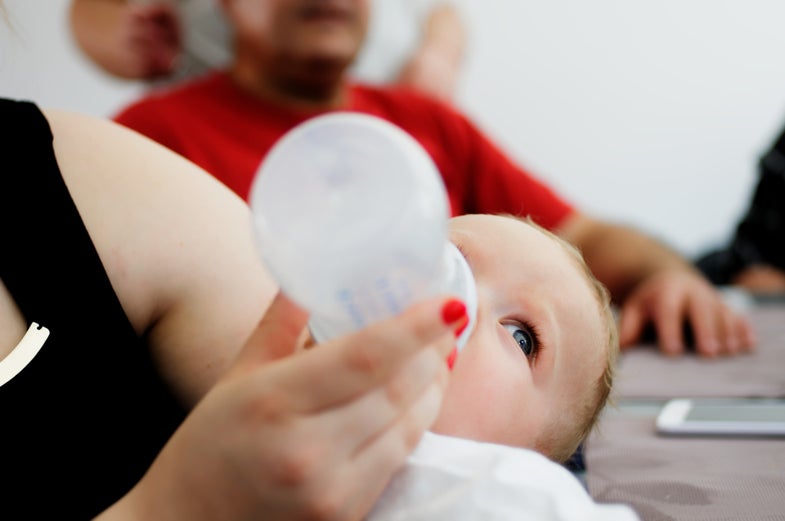 Being a parent is terrifying. As soon as you leave the hospital with your new bundle of joy, you’re responsible for its life. It’s normal to worry whether you’re feeding your child the right things. In fact, that’s one of the never ending parental concerns that you absolutely should take seriously.

But these genuine, important concerns can often get lost in the swirling abyss of misinformation on the internet. This week, the Clean Label Project, an independent, non profit organization that says its goal is to independently test food products for potentially dangerous contaminants, released a study saying that many commercially available baby food contains dangerous contaminants like arsenic and lead.

The problem is, this so-called study wasn’t published in a peer-reviewed journal and they won’t release their data to the public. That makes it impossible to determine whether its food testing practices, and the results are legitimate. Snopes, a site dedicated to fact-checking has already debunked the claims, but the “study” is still making the rounds on social media.

“If these findings are real, then we should be concerned and we should avoid those foods,” says Chad Hayes, a pediatrician in South Carolina. “But without knowing what they found, or how much of each chemical was present, there’s no reason to change our food practices.”

Why are these findings probably bogus?

The Clean Label Project claims that it independently tested products and found hazardous chemicals. But without any data to back that up, it’s impossible to gauge whether the group is correct. (Popular Science attempted to reach out to the Clean Label Project, but as of yet, the group hasn’t returned our messages. We’ll update the piece if it does.)

This might seem like a small sticking point, but the dose makes the poison. Yes, arsenic can be poisonous, but only at certain levels. For example, rice happens to absorb arsenic extremely well, so the plant will naturally always contain some level of the notorious element. For this reason, the FDA limits the amount of arsenic that can be in infant rice cereal to 100 parts per billion. That number means that, when consumed in those tiny amounts, researchers have not found it to cause detrimental effects.

So when a company that refuses to release its data claims that they “detected arsenic” in some baby food, the first question should be: How much? Because if it’s below 100 parts per billion, there should be no cause for concern.

Unfortunately, all the Clean Label Project is willing to provide is a star rating: Five stars indicates its relatively safe, while one star indicates more danger, but there’s no scale described. This tells us little to nothing about how much of any given contaminant the group may have found. The project also combined groups into “heavy metals,” “process contaminants,” “byproduct contaminants,” and “nutritional superiority,” so you can’t actually know which of the heavy metals or process contaminants might be in the food. Each product page just contains a star rating for the categories, but no more information about which specific chemicals were found.

With actual numbers, and information on the methods in which the group got those numbers, some of this information might be able to be verified. This type of evaluation and discussion should be in the group’s interest. If the organization actually found a massively widespread contamination problem, it should want others to investigate and corroborate its findings. The best way to protect consumers, which the group states is a main goal, is to have the data available so the FDA can use it to perform recalls if necessary. But that’s clearly not what’s happening. In fact, the group provides an affiliate, “Buy” button on its website for the very same products its claiming are toxic.

Hayes documents plenty more problems with the Clean Label Project on his website, including a fishy relationship between it and the testing lab, but suffice to say: This is likely not an organization you should trust.

What if I’m still worried about what to feed my baby?

That’s completely understandable. It’s a topic of much debate and angst among parents. Hayes says there’s absolutely no reason to avoid the brands flagged by this “study,” simply because there’s no reason to believe it’s valid. The one food he says to avoid feeding to babies younger than 12 months: honey. This is a widespread recommendation because honey sometimes contains tiny amounts of botulism. Adults have developed enough of an immune system to fight off these miniscule amounts of contamination but babies just aren’t there yet. Even these amounts could be toxic to infants.

Other than that, Hayes says “the only reason parents should be concerned about specific foods would be choosing foods that are developmentally appropriate.” So no choking hazards before they can chew or cow’s milk in lieu of breast milk or formula before age one. Try to get some veggies in there. Feed them whole grains. In essence: Feed them what you’d feed yourself, just softer.

If you’re still concerned, talk to your pediatrician. “I think a lot of parents are concerned, but talk to their pediatricians a lot less than they should,” says Hayes. “The danger is really that they’re getting their medical information from social media instead of talking to someone who knows what they’re talking about.”