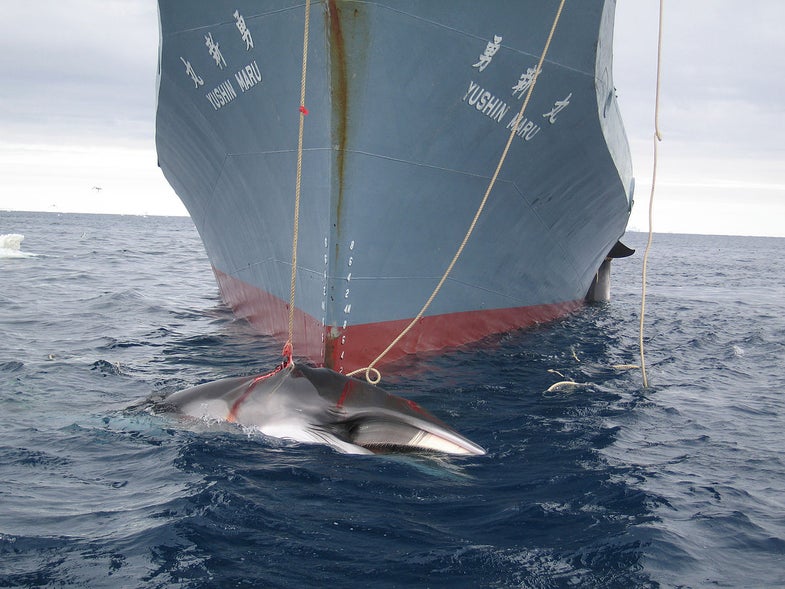 On March 31, Japan was ordered to halt its whaling program in Antarctica by a United Nations court, which ruled that the activity amounted to a commercial operation and was not for research purposes as stated. Now, less than three weeks later, Japan announced it will re-launch its whale-killing “research” operation next year, while addressing objections raised by the UN’s International Court of Justice.

The court’s decision gave Japan a golden opportunity to ditch a practice that has brought international condemnation, and which doesn’t appear to be that popular in Japan itself, as the country no longer consumes much whale meat. “We are revising the contents of the research to take into consideration the court’s decision to the greatest extent that we can,” the Minister of Agriculture, Yoshimasa Hayashi, told reporters. “We want to gather scientific data in order to resume commercial whaling as soon as possible.”

Japan “says its 26-year-old research program is needed to monitor recovering whale populations in the Southern Ocean, but opponents call it a crude cover for continued commercial whaling,” the New York Times reported. Crude indeed. By its own admission, Japan’s hunt isn’t really about research–or if it is, it’s about research geared toward restarting commercial whaling, which has been outlawed since 1986 (for the record, Norway and Iceland openly defy that moratorium). It’s hard to believe anybody could possibly believe that Japan needs to kill scores of whales–in the past, up to 950 minke, fin and humpback whales each year in the Southern Ocean, but presumably less in the future–to keep tabs on the animal’s populations. But so goes the absurd argument.

Yesterday (April 17) officials and lobbyists in Japan hosted a whale buffet to protest the UN court’s decision and celebrate the harvest of the large mammals.