The app takes clinic-quality pictures and emails them to a doctor for diagnosis. 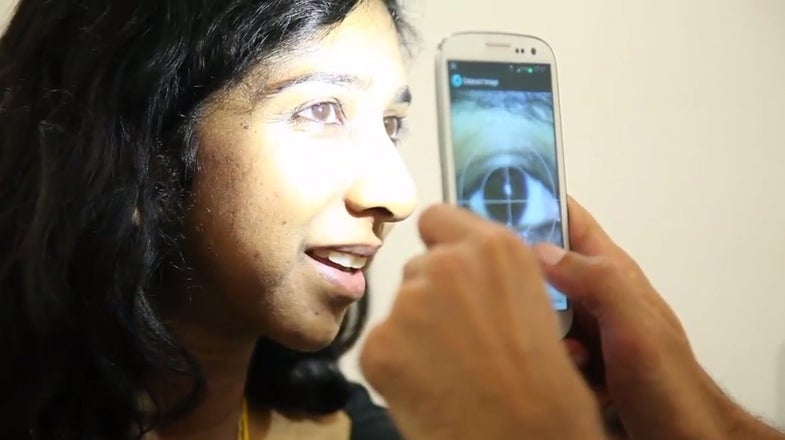 A handful of teachers in a poor region of Kenya will soon test a smartphone app to give their students eye exams, the BBC reports. Doctors there hope the app will help them catch vision problems in more kids. Once teachers find problems, they can send the kids onto doctors for treatment, all without requiring the limited number of eye doctors in the region to visit schools to do that first test.

The app is able to take pretty sophisticated images of the eye, including the back of the eye and the optic nerve, with the help of an add-on device. It also helps community health workers give that basic “Can you read a letter of this size?” eye exam. It’s called the Portable Eye Examination Kit, or Peek for short. You can see it at work in a video in that story by the BBC.

Many researchers from different labs around the world have tried making diagnosing apps for people living in regions where they can’t easily visit a doctor, because they don’t have transportation and/or because there aren’t enough doctors for the population. But many of those apps never make it beyond prototype. It’s nice to see one rigorously tested in the field.

The app’s makers, a team from the London School of Hygiene and Tropical Medicine, previously tested their app in 5,000 Kenyan adults. They haven’t finished that study yet, but they aim to compare their app’s diagnoses with those made by doctors going out to remote places with all of their standard equipment.