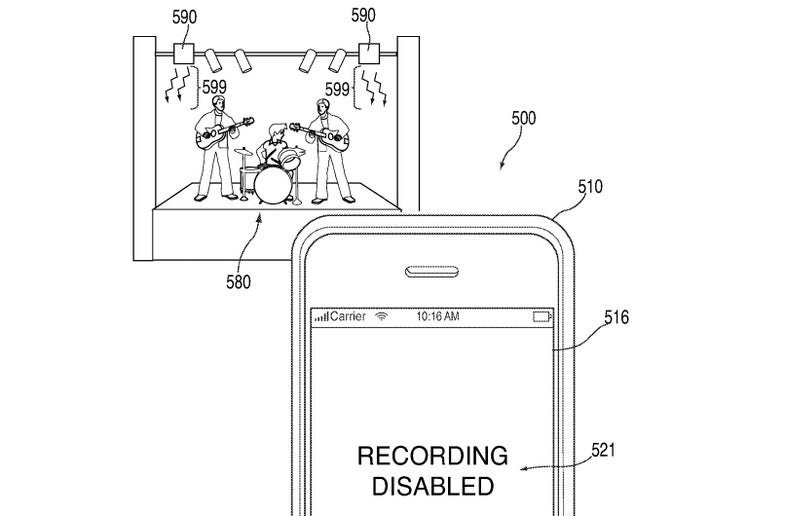 We like to think of our phones as our own, tools that we purchase and then control once they’re in our possession. That’s only ever partially true, even if we get the phone without a contract through a company. But there are ways for people to have even less control of their elaborate pocket computers. Like this patent recently granted to Apple, which would allow infrared transmitters set up in specific locations to prevent phones from recording video or audio.

The typical case would be concert venues, where people in the audience who tried to record the show with their phones would find them unable to work. That’s somewhat reasonable, depending on who you ask, and for people who hate phones, it might make the concert going experience better.

What’s more worrisome about a camera-disabling tech like this is in other places, where bystander video plays an important role. When House Democrats staged a sit-in of the house floor last week to protest a lack of gun control measures, the Republican speaker of the House turned off the television cameras CSPAN used to film the proceedings. CSPAN instead broadcast the protest through phone-based video streaming service Periscope, which still worked.

It’s easy to see the House, in the future, putting in technology that restricts filming from unauthorized sources. If the technology ever became portable, a version carried by police officers could accompany them on patrols, eliminating any bystander video of what they did and leaving police body-cams as the only existing source of film.

To get around a device like this, people could use non-phone cameras, but phone cameras are ubiquitous these days. A device that turns them off, or renders them inoperable in certain places, is a device opposed to photography and video writ large.