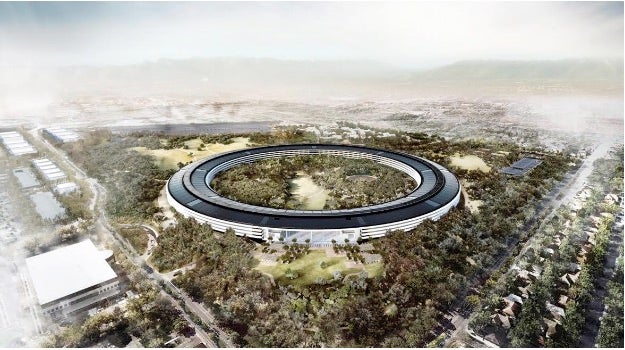 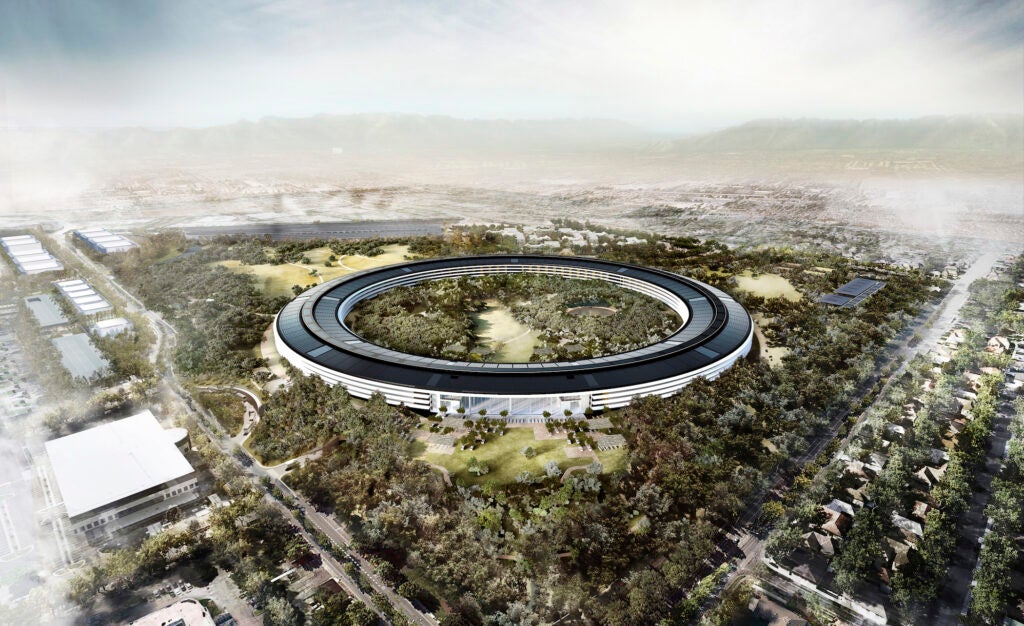 Three miles from Apple’s Cupertino, California headquarters, the tech giant is building something as massive as its own global reach: Apple’s Campus 2. The Spaceship, as many have nicknamed it, is over one mile in circumference—that’s wider than the Pentagon. When it’s completed later this year it will house 13,000 employees—including design grandmaster Jony Ive, who helped sculpt the iPhone, and CEO Tim Cook, who helps keep profits in the “billions-with-a-B” territory.

Campus 2 will run entirely on clean energy, powered by renewable sources. But what’s really grabbed our attention are the thousands of panels of curved window panes—the largest pieces of structural glass ever made—that will encase Apple’s mothership. Equally cool are the 60,000 pounds of hollow concrete slabs that allow the building to “breathe,” bolstering its eco-friendly qualities. With so many futuristic features, we wanted to get a closer look. Here’s what we found.

176: Acres the new Campus will occupy

1.23 million: Square footage of glass involved in the project

7,000: Weight, in pounds, of the heaviest panes of vertical glass

4,300: Concrete slabs needed for the floor and ceiling

60,000: How many pounds the heaviest concrete slabs weigh

75: Percentage of renewable energy that campus itself will produce during peak daytime hours

5 billion: Total cost, in dollars, this project is reported to approximately cost (Apple declined to comment on an official figure)

Using what Apple says are the world’s largest pieces of curved structural glass isn’t the easiest way to construct a workplace. But that’s what the computer company finds itself doing here. To build these sweeping panels, Apple could rely only on Sedak/Seele: the glass manufacturers behind the flagship Apple Store on Manhattan’s Fifth Avenue and the George Street store in Sydney, Australia. The German firm was tasked with fabricating glass panes between 36 and 46 feet wide at a length of 10-and-a-half feet.That’s over twice the length of the largest standard pane.

Manipulating glass into a curved shape is typically done during the tempering process. But this does not always result in a crystal-clear panel. To preserve clarity, the glass gurus tried something else. “We curved the glass during the final step of lamination,” says sedak/seele managing director Nelli Diller, “right after heating it to 600 degrees Celsius [1,112 degrees Fahrenheit] to strengthen it.” Glass is put into place via suction cups

Once finalized, the 20-ton crates of glass are shipped from Germany to California by boat, via the Atlantic Ocean through the Panama Canal. Each glass panel is installed by grabbing the glass with suction cups and moving it very slowly into place. All told, the campus boasts 900 panes of vertical glass, 1,600 panes of canopy glass, 510 panes of clerestory glass, and 126 panes for skylight glass. The heaviest pieces weigh over 3 tons. The best glass today has a 1/8-inch tolerance, meaning it can be 1/8-inch longer or shorter than specified. But Apple’s glass was designed with even closer precision:a 1/32-inch tolerance. 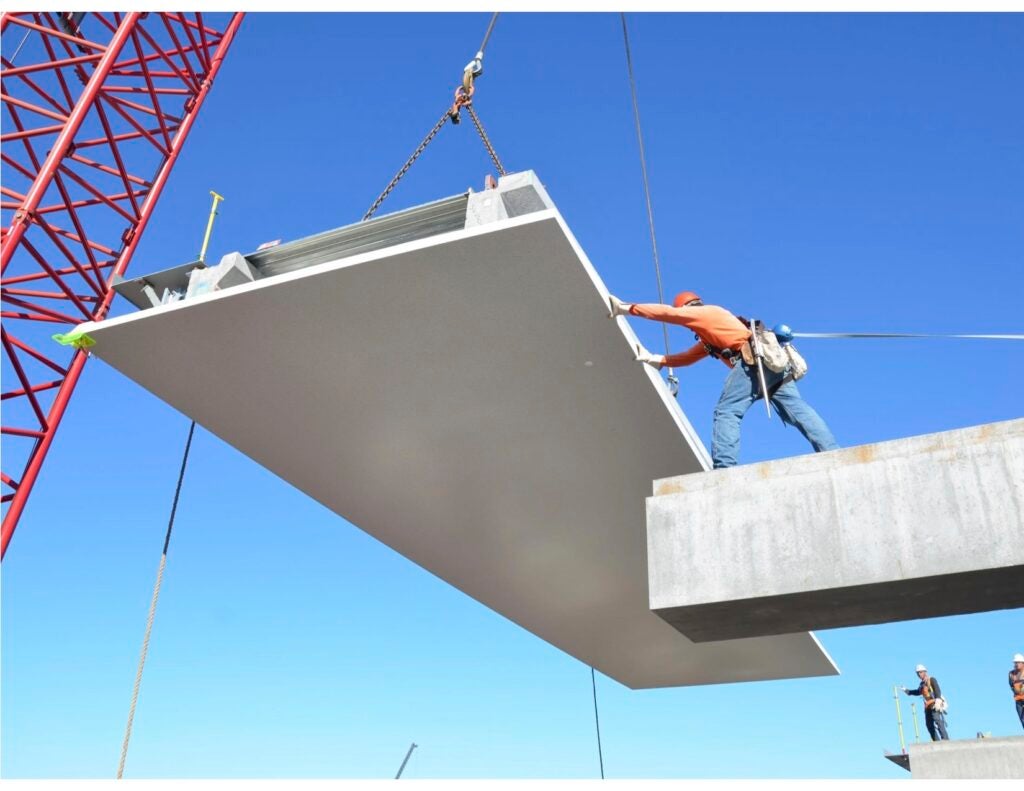 Void concrete slabs that help ventilate air in the building

Campus 2 uses custom concrete slabs which are designed with large, hollowed out middles, allowing the building to “breathe” on its own. This self-ventilation “largely removes the need for conventional cooling methods,” says Stefan Behling, a senior executive at international architecture and design firm Foster + Partners, the company behind the slabs. It took a team of 70 engineers to design them. To ensure employee comfort, Apple’s second campus will still build in a traditional cooling system. But ideally, it will function only as a fallback method.

Each concrete slab averages 13 feet by 40 feet. And just like with cinder blocks and I-beams, the hollow middle “doesn’t take away from the concrete’s strength,” says Behling. The company used 4,300 concrete slabs, weighing a total 212 tons, to create the structure. If that sounds heavy, compare it to the Spaceship’s 330-ton, 92-foot-tall steel reinforced restaurant doors. These dining-hall doors alone will span 60,000 square feet and collectively weigh 330 tons.

In addition to natural ventilation provided by the building’s concrete, Apple’s new building will run entirely on renewable energy, according to the company.

Rooftop solar panels will provide an output of 16 megawatts of power and act as the campus’s primary energy supplier. The Spaceship will receive additional juice from 4 megawatts baseload biogas fuel cells, which allow the campus to convert hydrogen and oxygen into energy. Apple expects to generate three-fourths of its energy needed during peak work hours using renewable sources itself. The rest will be come by way of Monterey County and energy company First Solar, thanks to a 130-megawatt solar project.

The campus will also place a big emphasis on cultivating natural surroundings: Eighty percent of the campus will be designated green space and include indigenous trees. With its second campus, Apple wants its employees to feel like they’re outside even when they’re not. Apple promises that no deforestation occurred while making their massive home base. Most of the area was already comprised of man-made structures. 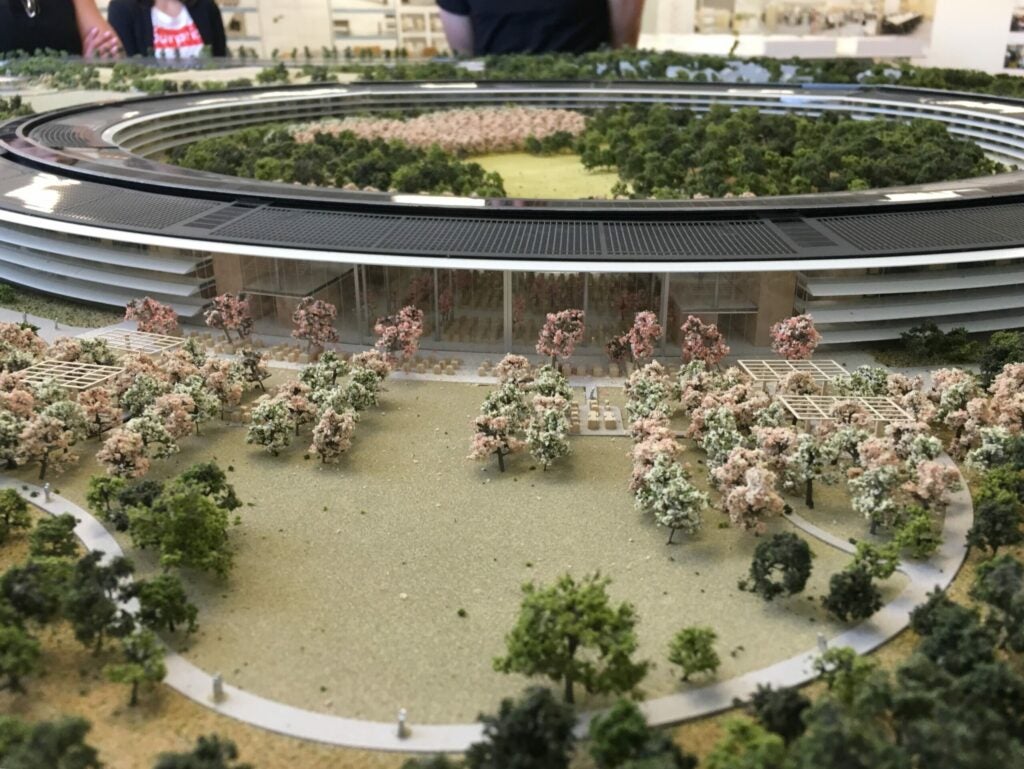 Apple’s model of their second campus, built to scale

Upon completion, the main building will have four stories above ground and three below. And there will be numerous other facilities too: seven cafes, a fitness center and a 120,000 square-foot theater where Apple will hold its famous product announcements.

Construction on the building is expected to be finished by the end of 2016. With the company’s employees moving in around early 2017, Apple’s Spaceship is closer than ever to its launch.

Another version of this article was published in the July/August 2016 issue of Popular Science, under the title “Apple’s Glass House.”