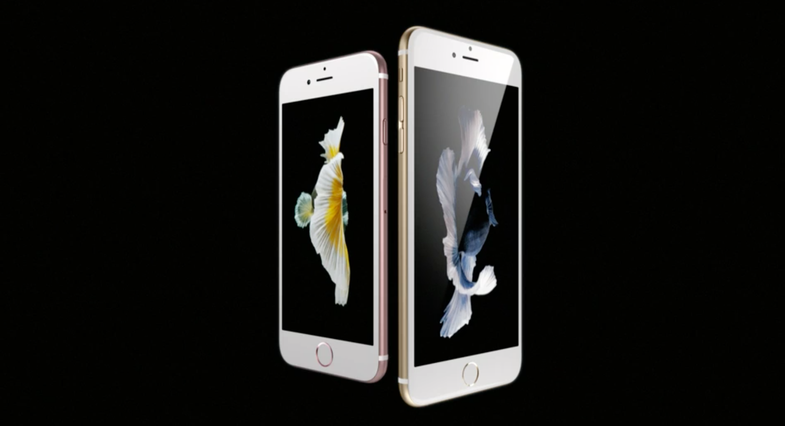 Apple announced the iPhone 6S and the 6S Plus today during their fall event in San Francisco. Apple/ Screenshot
SHARE

Apple announced their new iPhone 6S and 6S Plus today at its fall event in San Francisco. The phones have been given the standard Apple “S” treatment, with upgrades to their processors, cameras, and a smattering of other features including the long-rumored 3D Touch. The phones will also be available in a new Rose Gold color, which the rest of the world would call pink. They call the Rose Gold casing an entirely new kind of aluminum, not just a different kind of color.

The phones have been upgraded with Apple’s A9 processor, which even outside of Apple’s “full stack” boasts a 50 percent improvement over the A8 processor. Apple claims the A9 gives the iPhone a 90 percent GPU boost.

The phone’s cameras have also been upgraded: the rear-facing camera has been bumped to 12 megapixels with the ability to shoot 4K video, and the front-facing camera sits at 5 megapixels. The iPhones’ displays will also light up as a makeshift flash, matching the light in the room for proper color balance. Apple is also introducing “live photos”. It’s basically a GIF with the option of sound, but the camera takes 1.5 seconds of footage before and after the photo is taken. You can also set a live photo as your Apple Watch face, and Facebook will support live photos in the coming months as well.

The most significant addition to the 6S line is 3D Touch, a feature first debuted by Apple in the Apple Watch under the name Force Touch. Huawei actually beat Apple to the punch, announcing a similar capability last week in their Mate S flagship phone. The Chinese smartphone maker emphasizes their screen’s capability towards weighing objects, which maybe might be kinda useful sometimes, but Apple’s approach is more pragmatic.

Apple’s 3D Touch is more geared towards user interaction, adding new ways to access menus and giving easy previews of content. It uses sensors in the backlight, combined with data from the accelerometer and touchscreen to give accurate force readings. Apple calls this features “the next generation of multitouch.”

The new iPhones will also usher in iOS 9, Apple’s newest mobile operating system. From WWDC, we saw that the new OS will feature a learning algorithm that tracks daily habits (called Proactive), as well as multitasking capabilities for the iPad Air 2. Notes will also get a long-overdue upgrade. (For all the nitty-gritty developer details, check out our coverage of WWDC.)

Siri is also getting an upgrade. Proactive aside, the virtual personal assistant will be always at the ready, waiting to hear the words “Hey, Siri.” That feature is available now, but only when plugged into the wall.

Behind the scenes, we’re also going to see improvements to the phone’s LTE chip. The new Qualcomm chip doubles the LTE speeds from 150 mbps to 300 mbps, which while impressive, is relatively meaningless as most carriers average at 40 mbps on LTE.

During the keynote, CEO Tim Cook also touted the iPhone’s popularity, calling the 6 and 6 Plus not only the most popular phones in the world, but the “most loved phones”. The new line of iPhone 6S and 6S Plus will be priced $199 and $299 respectively for 16GB models on a two-year plan, or $27 per month on an installment plan. Apple is also offering their own installment plan, selling the new unlocked iPhones starting at $32 per month with a yearly trade-in and Apple Care+. They’ll be available for preorder September 12.