Aluminum production could get much better for the environment

The breakthrough is great news for your gadgets 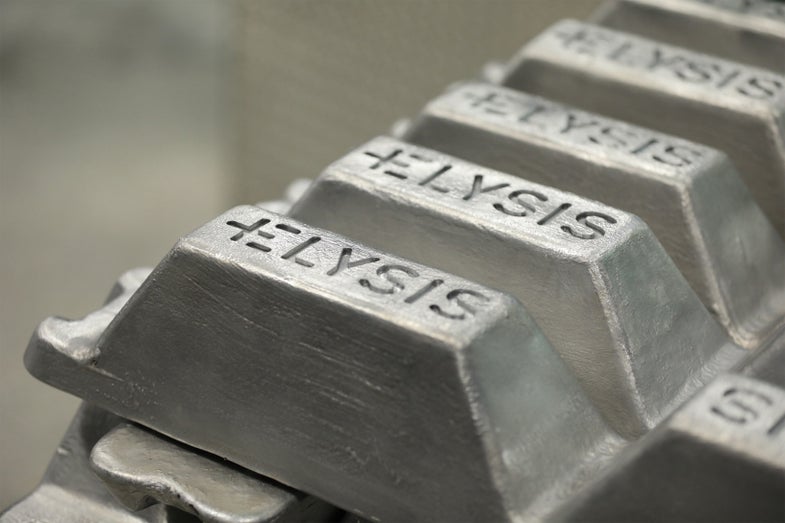 You probably don’t think about aluminum very much. But you should. The ubiquitous metal is in airplanes, iPhones, and engine blocks made by General Motors, to name just a few uses. A 12-inch MacBook, for example, consists of over half a pound of aluminum. And since the late 19th century, the metal has been smelted using the same method—a process that releases carbon dioxide, a greenhouse gas.

Today, two companies—Alcoa and Rio Tinto—announced that they’re working together following the discovery of a new way to smelt aluminum that releases oxygen, not carbon dioxide.

Aluminum begins as bauxite, a rock that miners dig from the ground. Aluminum producers then purify the bauxite to get aluminum oxide. Then, in a very hot smelting chamber (around 1,700 degree Fahrenheit), electricity separates the aluminum oxide into liquid aluminum—the good stuff, for making things—and oxygen. But the problem is, that oxygen then bonds with carbon, which is used in one electrode (the anode) in the system. That produces carbon dioxide—the bad stuff, for our planet.

“It takes about a half pound of carbon to be consumed in the production of about a pound of aluminum,” says Donald Sadoway, a professor of materials chemistry at MIT. “The aluminum process that we use today was invented in 1886 simultaneously by two men, one in the United States and one in France.” In short, it’s been done that way for a long time.

The breakthrough came from an aluminum company Alcoa, which found a way to replace the carbon anode with a different kind of inert, proprietary material—they’re not saying what it is. Using the method doesn’t produce carbon dioxide, just oxygen. Alcoa and mining company Rio Tinto are creating a new joint venture, called Elysis, which will focus develop the new, cleaner method. Alcoa says they’ve actually been producing aluminum with this new system since 2009 at a facility in Pennsylvania.

The initiative also involves Apple, which is interested in procuring the aluminum it uses to make its devices in a greener way. It’s investing about $10.1 million in the new venture; they’re interested in the tech because emissions from aluminum production account for 24 percent of the company’s carbon footprint—they use the metal in MacBooks, MacBook Pros (a 15-inch MacBook Pro contains over 1.5 pounds of aluminum), iPads, and iPhones like the 8 and 8 Plus. Apple says they will provide “technical support” for the new joint venture.

But the computer you buy next year probably won’t have aluminum in it smelted in a greenhouse-gas-free way: they expect the new method to be commercialized by 2024.