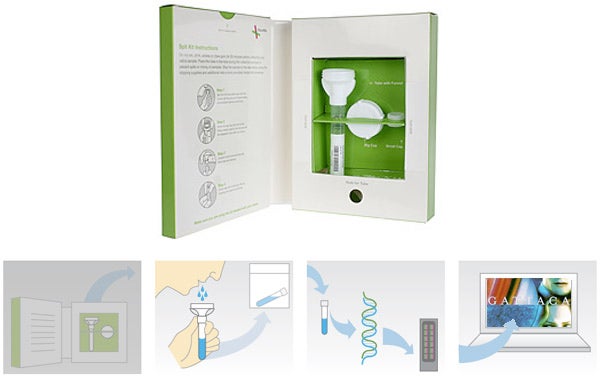 In its largest deal yet, personal genomics company 23andMe plans to analyze 3,000 of its customers’ genetic data for Genentech, a biotechnology company.

23andMe sells $99 spit kits to folks who want to get their genes read cheaply and without a doctor’s order. (The tests you get through a doctor are more targeted and much more expensive.) Until recently, the company used to tell customers whether they had genes that increased their risk for conditions such as Alzheimer’s disease and various cancers. Last year, however, the U.S. Food and Drug Administration told the company it could not give out that kind of health information without clearing their genetic tests with the FDA first. The FDA chastisement hurt sales, Forbes reports, but it left open a potentially much more lucrative business model for 23andMe: analyzing its customers’ data on behalf of pharmaceutical and health companies.

For Genentech, 23andMe researchers want to analyze genetic data from customers who have Parkinson’s disease, a progressive nervous-system disorder that has no cure (but lots of treatments that can help with symptoms). The analysis aims to look for genes or proteins in Parkinson’s patients, for which Genentech could develop drugs. Genentech, which is a unit of the pharmaceutical company Roche, is also looking for genetic data to back up some of the drugs it’s already developing. For this work and perhaps other deals, 23andMe may receive up to $50 million from Genentech, Forbes reports.

Those who sign up for 23andMe’s services get a document along the way asking if they’re willing to donate their data to scientists, including scientists at commercial companies. Most customers agree; Forbes reports about 600,000 out of 23andMe’s 800,000 customers have said yes. For the depth of information Genentech wants, however, 23andMe will have to ask customers for explicit permission, Forbes reports. Many may be willing to give it. Over the past few years, 23andMe has worked with the Michael J. Fox Foundation to recruit customers explicitly for research. If you have Parkinson’s, you can get 23andMe’s services for free.

Expect more deals like this in the future. 23andMe has previously conducted several medical studies on its own and with partners such as Pfizer, another pharmaceutical company. In the “coming months,” 23andMe plans to announce seven to eight more agreements with drug and biotech companies, according to a press release.