What’s Falling From The Sky In Harrison, Michigan? 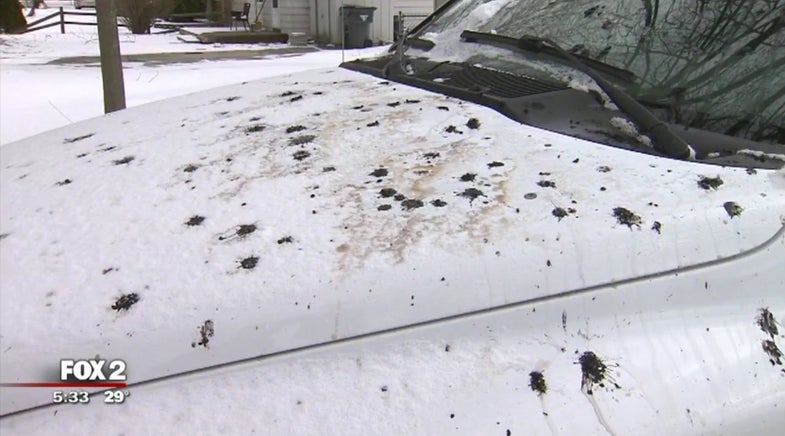 A strange black substance that looks like black bird droppings has added an unwelcome decoration to one Michigan town. Residents in Harrison Township are concerned about a weird splattering covering their neighborhood and no one is sure what it is. They know based on the splash patterns it probably fell from the sky, and the fire department says that the strange, oily, ashy substance is not flammable.

There are a few possibilities for what could have caused the gunk to fall from the sky. Bad weather like tornados or storms have been known to carry everything from golf balls to mud long distances only to deposit them on unsuspecting and unfortunate heads. In this case though, the weather in Harrison on Sunday, when residents first noticed the splatters, was clear, with a wind gust of up to 18 mph.

It could be animals. One resident noted that it did look like bird excrament, and it wouldn’t be the first time that birds have deposited unwelcome presents on people. In addition to their normal droppings, last year, seagulls dropped lampreys on an unsuspecting Alaskan town. Although right now, the sheer volume of the splatter would seem to rule out birds as the culprits.

It could also be from an airplane. The neighborhood is very close to Selfridge Air National Guard Base but officials at the base looked over the matter and said that there was no way the substance came from their planes.

Tests on the substance are being carried out by the Michigan Department of Environmental Quality. They hope to have an answer in roughly a week.