CEO Diess also addresses the diesel scandal and next steps 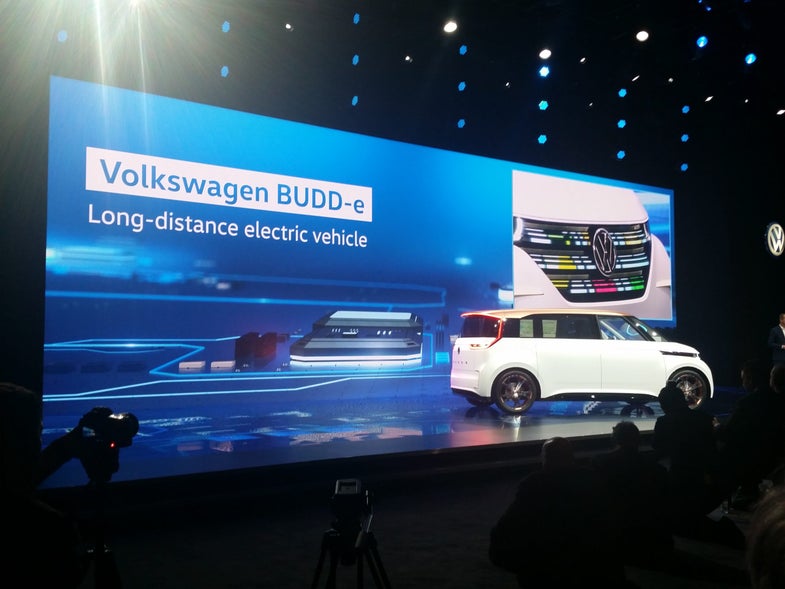 Volkswagen took another step toward winning back the hearts and minds of consumers at its CES 2016 keynote Tuesday night. After delivering what is now a usual – if seemingly sincere – apology from the stage, VW CEO Herbert Diess introduced two new electric vehicles: the e-Golf touch and the futuristic BUDD-e concept.

The e-Golf touch, which has both gesture and voice controls and wireless phone charging, will be available later this year. But it was the BUDD-e that made the tech types at the annual conference in Las Vegas gasp.

First, a video of the original VW microbus – “an apartment on wheels,” according to Diess – rolled on the giant screen that spanned the stage. Then the white micro van with colored LEDs rolled silently onto the physical stage, instantly charming the crowd.

The vehicle is based on VW’s new Modular Electric Toolkit, and it has a projected range of 373 miles and the ability to recharge 80% of its battery in 30 minutes. The batteries are arrayed flat under the floor, a first for VW’s platform architecture.

But that’s not what made people say, “Wow.” BUDD-e doesn’t have door handles, which are “so 2016,” according to Diess. Like everything in the vehicle, the doors can be opened with a gesture or a voice command. And at least in the concept, a swooshing sound like something from a sci-fi movie accompanied the opening of the door. Please, VW, keep this in the production vehicle.

The driver faces a big steering wheel similar to old VW buses and a bank of screens unlike anything a van in the ‘60s could imagine. The on-board apps integrate with a smart home, allowing you to unlock the door for guests, check the contents of the fridge, and thanks to a partnership with LG put your appliances in a low-power “away mode” when you drive away.

VW even had a package delivered to BUDD-e. The delivery guy used an app in his smart watch that opened a drawer in the rear bumper where he could leave a box, to amused laughter from the audience.

The question is whether this “new Volkswagen,” one that is focused on electric vehicles and connected mobility, can undo the damage done by 2015’s diesel scandal. Diess did end this fun, sugary concept debut with yet another apology, promising that “the most important issue in 2016 is to solve the diesel issue in the United States.”