How Typhoon Nepartak Got Its Supercharged Spin Cycle

Anatomy of a near-perfect storm 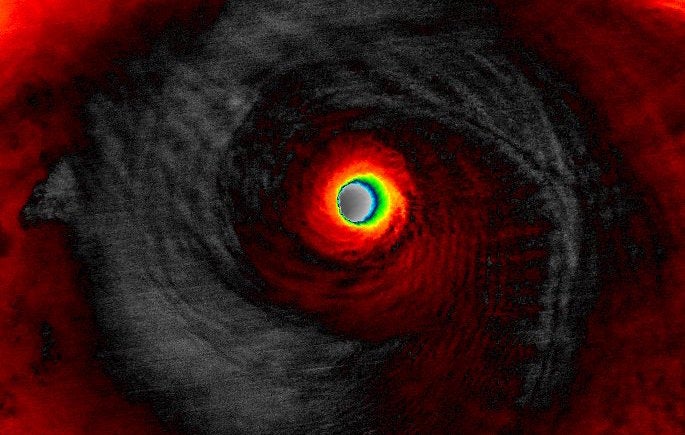 Typhoon Nepartak is veering toward Taiwan, delivering sustained winds upwards of 170 mph and waves over 40 feet high. The storm could be the most powerful to make landfall in almost half a century. Parts of the country will see more rainfall than New York City gathers in a year.

Nepartak is an outlier to be sure, a super typhoon with history-making muscle. The tropical cyclone is remarkable not just for its menacing strength but also its breakneck speed. Nepartak grew from a mild-mannered ocean tempest to a category 5 mega-storm in just three days. And it got a big boost from unusually warm waters in the Pacific.

Typhoons grow where seas radiate heat and winds lay stagnant. This creates a low pressure system rich with warm, humid air. Winds from surrounding high pressure systems swirl in, forming a cyclone. So long as the storm rests over waters that are at least 79º F, it will continue to gain strength. The warmer the ocean surface, the faster the cyclone will grow.

For Nepartak, conditions were ideal. Waters in the Philippine Sea surpassed 86º F, ramping up the spin cycle to produce a near-perfect storm of terrifying force.

Here, global warming may have played a role. Oceans absorb 93 percent of the heat trapped by carbon pollution. That’s a tremendous amount energy waiting to be discharged through powerful cyclones. Warmer waters effectively raise the speed limit for typhoons, producing stronger storms in a shorter period of time.

Nepartak fits the emerging trend of dangerous, fast-growing cyclones. Taiwan has closed schools and businesses and cancelled more than 100 flights at Taipei’s Taoyuan International Airport. Authorities have mobilized 35,000 soldiers to aid with disaster relief as the country braces for floods and power outages. Officials estimate some 3.1 million Taiwanese will be hit by blackouts.

The storm is expected to make landfall later today and continue on to China this weekend.