Human cancers aren’t contagious, but dogs and other animals aren’t so lucky 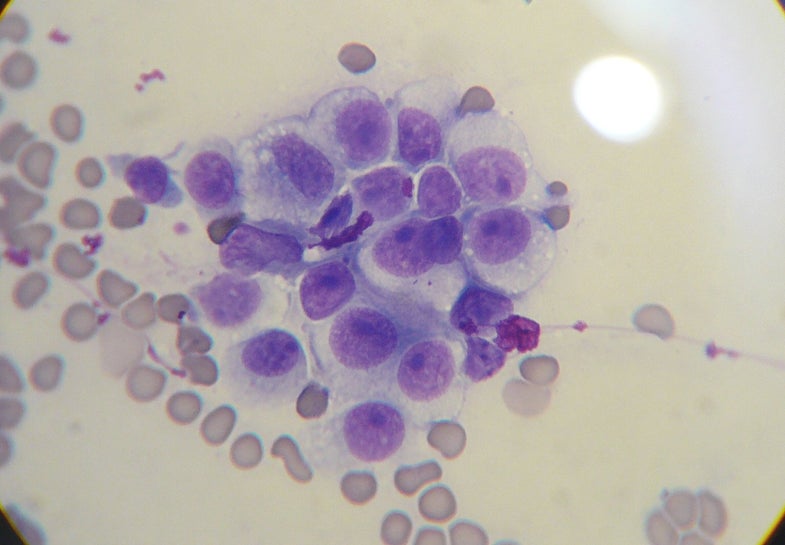 Whenever Máire Ní Leathlobhair visits a new city, she calls up vets in the area. She wants to know if they’ve seen any dogs harboring ugly genital tumors, contagious lumps that contain one of the more bizarre cancers in the world. Back in her lab, a map hangs on the wall, dotted with pins where her team has tracked down cases of the cancerous tumors, known as canine transmissible venereal tumors, or CTVT.

The cancer isn’t triggered by a virus, the way Human papillomavirus can prompt cervical cancer in people. Instead, CTVT spreads between dogs by the transfer of cancerous cells themselves. “It’s like if you were to get a graft of different tissue or an organ transplant. But in this case, it’s a tumor,” explains Ní Leathlobhair, a geneticist who is part of the Transmissible Cancer Group at the University of Cambridge.

Rather than rejecting the tumor as an invader, dogs’ immune systems will ignore the foreign cells. Sadly, they’re not the only animals whose immune systems offer aid to cancerous interlopers. Tasmanian devils also grow disfiguring tumors that cover their face, eventually killing the marsupials in a grotesque, painful death. And more than a dozen strains of cancerous cells drift in seawater, infecting several species of mussels and clams.

This is not how cancer usually works. Cancer stems from mutated cells continually making copies of themselves inside an individual. If you had cancer, those cells would contain your own DNA, and when you died, your cancer would (usually) perish with you. Under normal circumstances, you wouldn’t be able to transfer cancer to others, and unless researchers made a particular effort to preserve them, the cancerous cells would die too.

Transmissible cancers are special because they’ve figured out a way to cheat death. Instead of disappearing with their original host, they’ve managed to survive and take on a life of their own, says Elizabeth Murchison, who heads the Transmissible Cancer Group. Unlike normal cancers, these cells don’t share the same genetic code of the animals they infect. They hold the DNA from the original dog, Tasmanian devil or clam who first birthed the weird, contagious disease.

In dogs, Ní Leathlobhair and her colleagues have tracked the source of CTVT to an ancient pup who lived thousands of years ago. “The same piece of DNA from that one dog is being passed from dog to dog to dog,” she says. “Now this genome has millions of additional mutations, but it still contains the original DNA from that first dog.”

People have long noticed the nasty growths, which are sexually transmitted by their pets. The first written records of CTVT go back to 1810, in a book on animal diseases by a vet in London. A few decades later, a Russian vet published a paper proving he could transfer the tumors between dogs. People kept messing with the disease into the beginning of the 20th century, when scientists captured foxes, coyotes, and jackals and injected them with the dog cancer, showing that the tumors could briefly live in other species.

Today, no one is experimenting with spreading dog cancer. But researchers have tracked the disease in 90 countries, on every continent except Antarctica. The cancer is most common in places where dog breeding isn’t controlled, like Romania, Mexico, and India, according to Ní Leathlobhair. In every tumor her group has tested, the genes trace back to a single source. “We’ve sampled thousands of these tumors from different parts of the world and they’re all the same clone,” Murchison says. “It’s really striking.”

In Tasmanian devils, the story gets more complicated. Murchison started investigating transmissible cancers when she heard about a disease spreading in the devils, inhabitants of the Australian state where she grew up. In the 1990s, devils started sprouting facial tumors, a disease killing off the animals in hoards. Today, the cancer has killed off more than 95 percent of the devil population.

At first, researchers suspected a virus was behind the cancer. But when Murchison sequenced the tumor cells, their genetic makeup didn’t match the DNA of their hosts. When she compared tumors from multiple animals, she found they were genetically identical. Just as in dogs, it seemed the cancer arose in one individual and infiltrated the island.

For dogs, the tumors are pretty cheap and easy to treat. Vets use a basic chemotherapy drug that eliminates the growths completely. “It works like magic,” Murchison says. But in Tasmanian devils, managing the disease isn’t so simple. The same drug isn’t effective, and researchers now believe devils might be particularly susceptible to these types of cancers.

That’s because Murchison’s team found a second transmissible cancer in the devils in 2014. “It was a total surprise,” she says. When scientists first came across the cancer, it seemed possible the devils were just the unlikely inheritors of “a kind of fluke of nature,” Murchison explains. But with the discovery of this second devil cancer “that made us think, maybe they aren’t as rare as we had thought all along,” she says.

If two separate cancers had evolved just in the last few decades, the animals might have lived with similar diseases for a long time, Murchison speculates. This could be because devils have relatively little genetic variation, so it’s easier for the cancers to sneak past the animals’ immune defenses. The devils are also fond of nipping each other’s faces, a potentially easy way to spread disease.

Looking deeper, it appears contagious cancers can arise fairly frequently in the right environments. In 2015, researchers pinpointed transmissible cancer in the sea. Something was infecting the blood-like substance in softshell clams, causing massive die-offs. Normally, the fluid coursing through their bodies is clear. But in the sick animals, their blood was so clogged with extra cells that it looked milky.

When Stephen Goff, a molecular biologist at Columbia University, looked at the genetic code of the clams and the cells floating in their blood, a familiar picture arose. “We found that all the tumors were identical. They were all just one clone. And that clone did not match the DNA of the animal they were in,” he says. “This tumor had arisen once, long ago, and has spread up and down the east coast from clam to clam.”

The discovery of transmissible cancer underwater came as a shock. “From the start, that was always the crazy possible side-hypothesis,” says Michael Metzger, another molecular biologist at Pacific Northwest Research Institute who worked with Goff to investigate the disease. But he didn’t think cancer could actually spread with no direct physical contact, in creatures totally different from the dogs and devils.

As Goff and Metzger talked to more marine biologists, they learned that other species had similar diseases. It turns out cockles, mussels, and other clams all have their own transmissible cancers. One species has two cancers, just like the devils, and another clam has a cancer that jumped to an entirely different species. “It’s relatively common,” Goff says.

By looking at cancers that can hop between clams, travel across continents, and bounce among nuzzling Tasmanian devils, researchers hope to apply their findings to human cancers. Because these diseases have persisted for generations, they provide a window to see how cancers evolve, a phenomenon difficult to detect in the short lifespan of human cancers, Murchison says.

What’s more, transmissible cancers illustrate the fraught relationship between a cancer and its host, displayed on a grand scale. The cells aren’t just duping their owner, they’re escaping the wrath of a totally novel immune system. Goff thinks this can teach us about how cancer spreads within our bodies. “This spreading in the ocean is kind of a macro-version of what goes on in a person,” he says.