It has everything: Lidar, helium balloons, sensors for measuring wind, precipitation, air quality, and more. 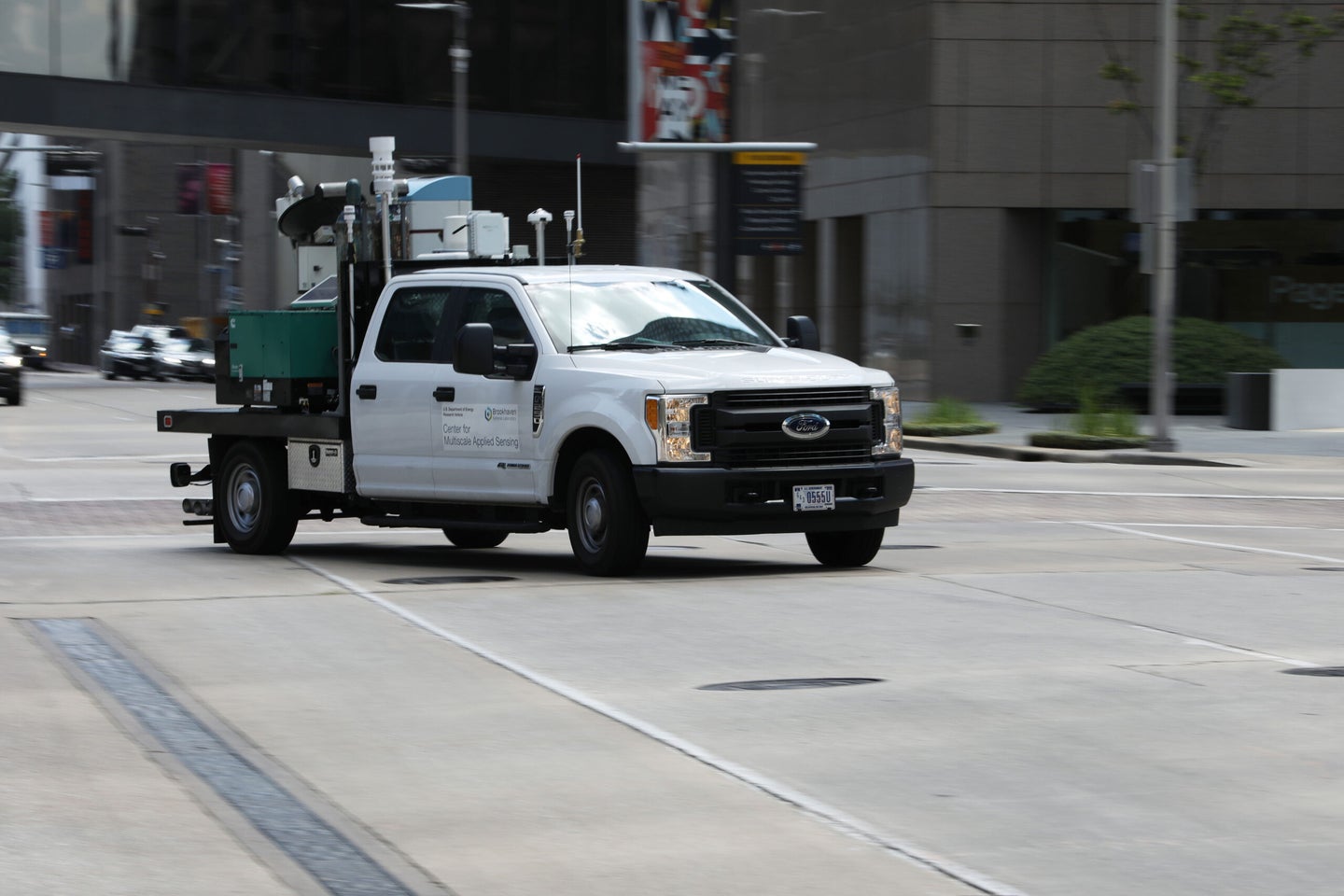 The Brookhaven truck on the road. Brookhaven National Laboratory
SHARE

A truck with sensors and lasers from Brookhaven National Laboratory is driving around cities, hoping to gather valuable data about how man-made urban environments are being affected by a warming world. In fact, this July, many US states had a hot hot summer, with four states reporting the highest temperatures to date on record.

This mobile makeshift laboratory has been rumbling about since last year. A team at Brookhaven’s Center for Multiscale Applied Sensing used the data that the truck collected last June in Manhattan to understand how sunshine impacted the air flow around skyscrapers, and how the skyscrapers themselves played a role in ventilation of pollutants and such from city streets.

In an updated news release from July this year, Brookhaven said that the truck has traveled 1,700 miles from Upton, New York to Houston, Texas, which is the next sampling stop for the team.

Scientists know that cities, with their concrete sidewalks and steel buildings, tend to be hotter compared to rural areas around them. The movement of air, mixed in with uneven heating from the sun, wind, and lack of tree shade, form the basis of the science behind the urban heat island phenomenon. Cities essentially turn into heat-encapsulating ovens.

“Each city has its own unique urban environment,” Katia Lamer, a climate scientist at Brookhaven National Laboratory and a researcher on this project, said in a press release. “New York City has a subway system, which has air moving in and out of underground tunnels, and the city is coastal, so it feels the effect of the sea breeze. Houston, in contrast, does not have an underground subway system and has smaller buildings. As such, it should have a different urban atmospheric structure.”

Within these cities, the design of spaces as well as the geometry of buildings surrounding a space can impact air flow, making it such that every neighborhood, and every street, and even every floor inside a building, could experience their own microclimates.

“To monitor wind patterns above ground level, the research team used the mobile observatory’s scanning Doppler lidar, a laser system that can measure the movement of particles in the air,” Brookhaven explained in a press release late July. “Real-time data from a fisheye camera guided the lidar.”

Many scientists, including those at NASA, have been using special kinds of lidar technology to look at clouds and small particles such as aerosols in the atmosphere. Doppler lidars, in particular, shoot out short pulses of infrared laser light into the atmosphere. As light hits aerosols like dust, water, pollutants, a small fraction of it is scattered back to the receiver, which then records the data points. Lidar has previously been used to make observations of forest smoke and pollution; some versions of it are also used with self-driving cars.

In addition to lidar, the truck is loaded with instruments that can measure air temperature, air quality, humidity, and more. And, it comes stocked with 32 helium balloons containing atmospheric sensors.

[Related: A climate adaptation experiment is taking place in one of NYC’s biggest parks]

“Typically, we launch giant weather balloons in open fields to measure temperature and humidity up to 24 miles in the sky. There isn’t sufficient space in cities for the giant balloons to rise without hitting obstacles, and they may rise through navigable airspace and disturb flight traffic,” Lamer said. “Instead, we tried to use miniaturized instruments that can be lifted by party balloons that don’t fly as high as weather balloons but fly high enough to capture data in the region of the atmosphere that impacts people the most.”

These balloons can collect information on things like humidity, temperature, and wind as they rise up, and they can radio back this data to researchers walking on the ground.

Collecting more detailed information about microclimate changes from neighborhood to neighborhood, or even street to street, is important. It could inform government agencies about which communities will be hardest hit by rising temperatures, and point out places in need of mitigation techniques like green spaces, or additional support with infrastructure and energy. (London’s transportation infrastructure, for one, has been buckling under the recent heatwave, and The Washington Post even designed a fake metropolis to illustrate how extreme temperatures can damage cities.)

Although this special laser sensor truck is one-of-a-kind, Lamer told Wired that she imagines components from the mobile laboratory could be installed onto city buses in order to collect an even wider range of data and cover more ground.

Watch the project in action below: