While those reefs are still around to document. 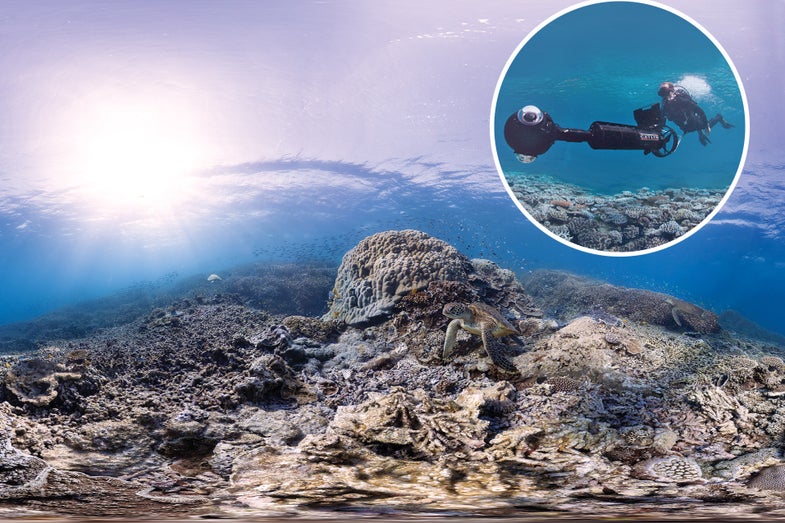 Last year, the Catlin Seaview Survey completed the most detailed picture of Australia’s Great Barrier Reef. Using underwater vehicles with 360-degree cameras, the survey’s scientists and divers captured more than 100,000 panoramic photographs. Panoramas save precious time—experts think the reef could disappear entirely in the next couple of decades. The team hopes the comprehensive look at the ecosystem will provide insights about how to save it and others around the world. Next, the crew, led by scientist Ove Hoegh-Guldberg of the University of Queensland, will shoot reefs in the Philippines.

PopSci: Why take photos?
Ove Hoegh-Guldberg: We can extract enormous amounts of info, like the health of coral reefs, the number of organisms, and so on.

PS: How do you get data from 90 miles of pictures?
H-G: We use a computer program that recognizes organisms. It will go, “Okay, if it’s pink with little bumps with a brown patch around it, it’s probably a coral and not a seaweed.” These techniques can get to 90 percent of a human’s accuracy.

PS: What cameras do you use?
H-G: We have remotely operated dive vehicles that take video and collect specimens. And then there’s the SVII panoramic camera for shallower depths, which is pretty groovy. It’s a propelled vehicle: A diver hangs on and off you go at about two miles an hour. There are three cameras inside with wide-angle views that take photos every three to four seconds.

PS: What animals have you encountered?
H-G: Little reef sharks will come swimming along beside you. And you see the odd sea snake, one of the more poisonous animals out there. You know, the main worry is making sure the diver doesn’t run into a reef.

PS: Do you think we’ll be able to save the reefs?
H-G: If we don’t get the climate thing under control, then I don’t think there’s any hope for reefs—or humanity in general. But deep-water environments may represent a refuge from climate change; in the deeper parts of the ocean, heating is a lot less. I’ve seen reefs come back. It’s a matter of taking action.