The First Affordable Home Security System That Can Think For Itself

"Your cat is just chasing a reflection. Maybe I shouldn't alert the homeowner about this. Or, wait...maybe I should." 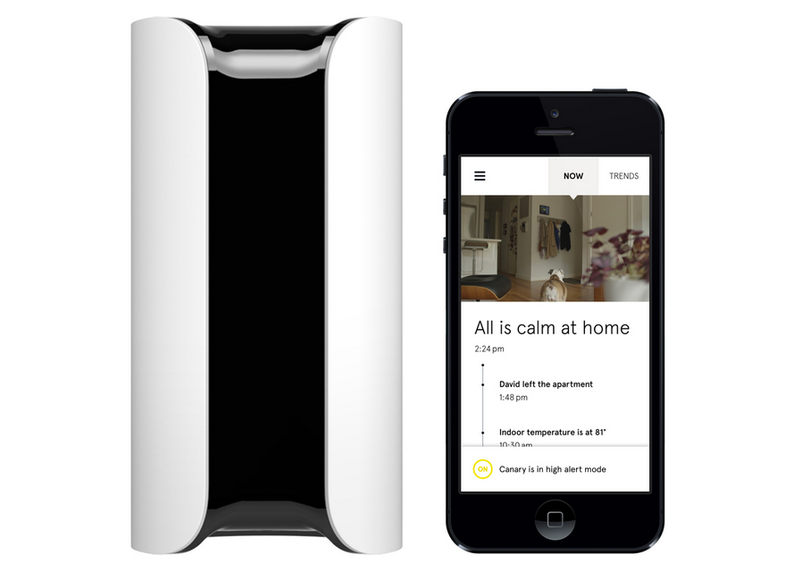 Canary, a new networked home security system, was posted on Indiegogo this morning. There are lots of similar inexpensive systems out there–most notably the Dropcam–but we’re intrigued by the Canary because it’s the first system we’ve seen that’s designed to learn your habits and improve over time.

According to Lifehacker, homes without security are three times as likely to be broken into as homes with some form of security. That might be due to an unfair couple of reasons: homes in poorer areas are more at risk of break-ins, and the prohibitive cost of home security systems puts them out of reach of poorer households. But there’s no reason for that; the components are no longer that expensive (cameras, sound and motion sensors) and it’s easier than ever to connect through the cloud so you can monitor your home from anywhere, anytime.

Adam Sager, the co-founder and CEO of Canary, has done embedded security for the Israeli Defense Forces before becoming a consultant for banks and other private corporations, which led him to startups. He’s used to capital-S security, but he’s changed his focus to private home security. “The major problems,” he says, “are that you can’t really install stuff as a renter, [other security systems] are very expensive, and they’re not actually that effective.”

The Canary is an all-in-one device, like the Dropcam. The design is already locked-in; it’s a black-and-white cylinder that looks sort of like a tiny garbage can you’d find on a spaceship in a couple hundred years. It’s six inches tall and three inches in diameter, and the camera (and all the other sensors) are hidden behind a black strip of plastic. It’s not adjustable at all. The Dropcam can only be adjusted manually, but it can be pointed in any direction. The Canary can’t even do that; Sager told me that the team chose not to go with a motorized system because those are often the first components to break. But the fact that it can’t even be adjusted by hand might be a problem: you’ll have to stack magazines under it or something if you want to point it in a particular place.

The actual hardware, all inside that little cylinder, focuses of an HD camera (we’d guess 720p) with night vision and a wide-angle lens to see as much of the room as possible. It also has a motion detector, a microphone and speaker, an accelerometer, and a handful of air sensors (temperature, humidity, air quality). Some of those are new; the Dropcam, for example, doesn’t have the air sensors. But we’re most excited about the software. Here’s how you set it up. 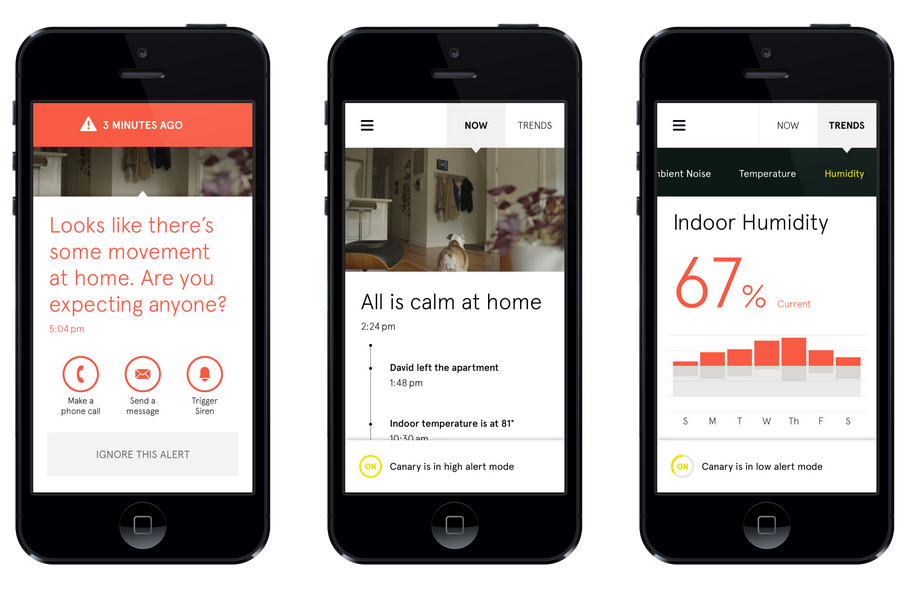 Stick the Canary in your living room. Plug it in via AC. Connect it to your Wi-Fi network. That’s it for hardware setup. Then the Canary goes about learning about you–when you’re usually in the house, if you have a pet, if you have a cleaning service or dog-walking service that comes into your house regularly, if you have a neighbor who routinely borrows things from your home, that kind of thing. At first, it’ll send alerts your smartphone (I saw a mockup on an iPhone) for pretty much everything it sees. Then you can decide exactly how sensitive you want it to be. Do you want it to alert you to everything its sensors pick up? Or let it figure out what’s normal and abnormal?

If you pick the latter option and let the algorithms take over, you can just dismiss all of the alerts that are for normal, intended things. Then it’ll only send you alerts when something it’s never seen before happens.

It’s a cloud-based service, but that doesn’t mean you have to pay anything. The free version will let you watch live and also see the last six “instances,” as Sager calls them, meaning the last six times something weird happened in your house. You can pay a monthly fee (they’re not sure how much that’ll cost yet) that gives DVR options so you can scroll back in time to see what your cat does when you’re at work (spoiler: it sleeps). Other options will include more data saved or access to a 24/7 call center.

I asked whether a single camera could really provide a full security system. Sager told me the Canary will allow you to add extra Canary units in other rooms, if you want, but that for a small apartment, he doesn’t think it’s necessary. His theory is that even if someone breaks into your house through your bathroom window, your creative burglar will still make his or her way to the living room at some point–where you’ve set up your Canary.

Given that the Canary knows all your habits and risk points, the security system’s security is pretty important. Sager says the data will be encrypted end to end, and that they’ll be using Amazon’s encryption (the video will be stored on Amazon’s servers). “I’ve done this for banks and some of the world’s largest companies,” he says. “I know how important data security is.”

The Canary was posted on Indiegogo early this morning, looking for a $100,000 funding. Early funders will get to buy the Canary at a reduced price of $150, but the final product will, Sager thinks, cost $200. That’s a little more than the Dropcam, but the Canary has more sensors and that learning algorithm powers, which could be worth it to you.