The Most Exciting Google Service In Years, Google Now, Comes To iPhone and iPad 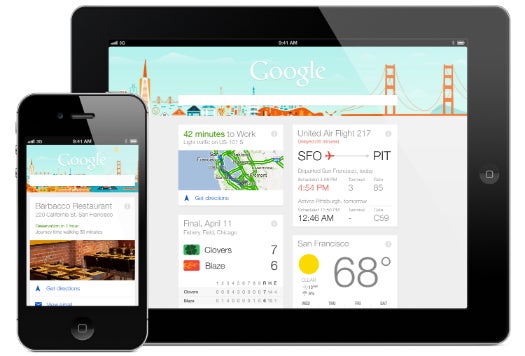 Google Now, the service that’s made us say “holy crap” out loud more than just about anything else over the past year, is finally leaving its warm Android nest for less familiar climes: iOS. Starting right now, iPhone and iPad owners can get Google Now on their devices. It won’t work quite as seamlessly as Google Now on Android, but we’re still pretty excited about it.

We awarded Google Now this year’s Innovation of the Year award, besting the Tesla Model S, the Nest thermostat, and a whole host of other awesome gear. If you’re unfamiliar: Google Now takes everything that Google knows about you, from your use of Google Search, Gmail, Maps, Docs, and lord knows what else, and analyzes it to tell you exactly what you need to know in a series of “cards.” Call up Google Now on your phone, and it won’t just say “you have an appointment at this date and this time”; it’ll figure out where you are, where you’re going, and that, for example, you like to take public transportation rather than drive. Then it’ll say “you need to leave in 12 minutes to catch the C train to get to your appointment on time.” Or: it notices you’ve been searching for a specific movie, reading reviews and such. Open up Google Now, and it’ll show you showtimes for that movie, near where you are right now.

It tells you what you actually need to know by taking the raw data one step further. It toes the line between creepy and useful, for sure, but it’s so cool and practical that the thought of “wait, how does Google know so much about me?” is drowned out by “whoa, that’s amazing.”

This morning, Google finally launched Google Now on iOS, specifically iPhone and iPad. It’s folded into the existing Google app, which before today functioned as kind of a portal to other Google services. Now, when you open the Google app, you’ll see Google Now. This is a marked difference from how Google Now operates on Android; since Android is also a Google product, Google could integrate Google Now deeply into the Android ecosystem–you just press and hold the home button on an Android device to open Google Now. On the iPhone, you’ll have to open the app.

There are a few other concessions; the Android app is linked to all other Google apps, so if you’re looking at that movie showtimes card, it can link directly to, say, the Maps app to show you location. On iOS, that link would open Google Maps in your mobile Safari browser–not an optimal solution. And since the iPhone doesn’t do homescreen widgets, you won’t get a Google Now widget, either.

The iPhone also has a few more restrictions on apps running in the background, which is key for Google Now to work properly. You’ll have to make sure the Google app is running, though I’ll have to test the app a bit more to find out exactly how much of a pain that is. And the iPhone is just a step behind in terms of the number of “cards” you’ll have access to. It does have most of them, but you’ll still miss out on a few. iOS won’t have the airplane boarding pass card, Zillow real estate card, or Fandango movies card, though they’ll probably come a bit later. Google Now won’t be quite as good on iOS for the same reason that Google Maps on Android is just a bit better than Google Maps for iOS. “We believe you get the best of Google on Android, and that’s still the case,” Google told me.

But! Otherwise, Google Now seems to have made the transition intact. Open up Google Now on your iPhone, and you’ll see the weather, how your preferred sports team did last night, whether your Amazon package shipped, how your stocks are doing, when the next train is coming, traffic alerts, reservations you’ve made, upcoming appointments, all that stuff–without you specifically telling the app any of it.

Google Now is available, um, now, in the app store. Download the Google app (or update your app, if you already have it) to get it. Here’s the link.