Look to the iris. 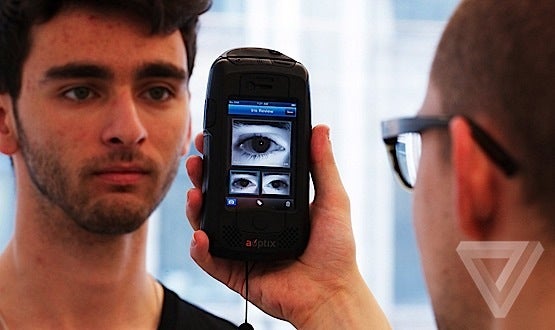 Iris scanning as a form of biometric recognition doesn’t get as much attention as retinal scanning or fingerprints, but it’s got a lot of advantages. Irises don’t change over time, like fingerprints can, there’s no need for any actual physical contact to get a scan, and it’s hard to fool an iris scanner with surgery or other medical alteration. Now, there’s one even bigger advantage: you can carry an iris scanner around with you in one hand.

Russell Brandom over at the Verge has a nice look at AOptix, a company that has created what we can only think of as a “recognizer.” It’s an iPhone case that includes an iris scanner, a fingerprint scanner, and facial recognition ability–it’s kind of a one-stop shop for figuring out who someone is.

Iris scanners work by essentially taking a picture of the iris, the colored part of the eye around the pupil. The specific patters are as unique as fingerprints. You take these pictures by shining a bright infrared light at the iris, and then matching the patterns with a database. The biggest problem? It can be fooled by, well, an actual photograph of an iris. But when taking a scan from 10 inches away, it’d be hard to slip in a photo in front of the scanner.

AOptix is pitching the case to police and other security forces, and as iris scans become more and more common, it’s likely you’ll see more and more of these scanners as well. AOptix says the scanner can work from up to 60 feet away, which has greatly interested such organizations as the Department of Homeland Security. That’s something you can’t do with fingerprints, for sure.

AOptix says this particular device is short-range, citing “a limited market” for a long-range sensor. But that’s the potential of this tech, and now it’s going to get into the hands of domestic law enforcement.

For more on the new world of iris scanners, head to the Verge.