Life Inside The Most Densely Populated Place On Earth [Infographic]

A former military fort controlled by the Triads, Kowloon Walled City was demolished 20 years ago. Here's what life was like there. 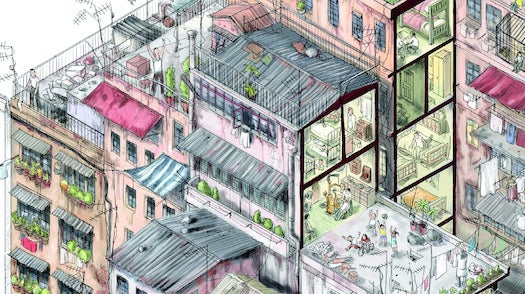 Manhattan has the highest population density of any city in the United States, at 27,000 people per square mile. Whoof! That is an awful lot of people. Unless you’re comparing it to the vice-ridden former Chinese military fort known as Kowloon Walled City, which prior to its destruction in 1994 had a population density of 3.25 million people per square mile.

The Walled City dates back about a thousand years, but it was only in the 1950s that it turned from a former military fort into an outrageously densely populated structure controlled by vicious gangs. But it remained one of the most peculiar inhabited areas on the planet, its jurisdiction unclear, a country within Hong Kong within China or Britain. To mark the 20-year anniversary of its demolition, the South China Morning Post made this fascinating infographic. If you like the sorts of graphics that show intricate structures, this is definitely one to pore over. Read more about it here.