A few well-placed magnets eliminates the thwack of an arrow leaving the bow, making archers stealthier and more accurate 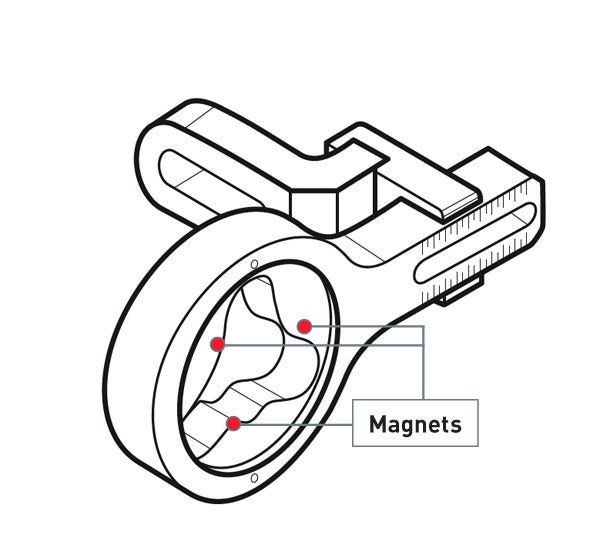 Strong magnets in the Air-Rest react with a magnetic insert glued into the arrow body to float the arrow precisely in the center of the rest until released.

Stuart Minica spies a white-tailed buck 30 yards away, sil-ently raises his bow, takes aim, and illustrates a problem that’s plagued archers since the bow was invented. As the arrow slides along the rest, leaving the bow with a noisy thwack, the deer starts and instantly disappears into the underbrush.

An arrow rest, which keeps the arrow level until its release, creates noisy friction that slows the arrow and spooks the game. Fed up, Minica, a 31-year-old mechanical engineer who lives near San Antonio, Texas, devised a way to simply float the arrow in midair instead.

His Air-Rest uses a powerful but light wraparound neodymium magnet, which reacts with a magnetic insert that can be glued into the hollow of a standard arrow. As the arrow is drawn, it slides noiselessly on a piece of felt until the magnets interact, levitating the arrow.

“I’ve been using the Air-Rest for several months,” says Kelly Garmon, the owner of HawgLite, an online archery-accessory company. “When I go hog-hunting now, I don’t miss a shot.” It may not create bull’s-eye shooters overnight, says Anthony Licata, deputy editor of Field & Stream magazine, but “it’s a very clever device, and one of those ‘Why didn’t I think of that?’ products.”

Minica, whose wife calls him a “missing person” during bow season, struggled through at least 10 prototypes-“pulling all-nighters at my friend’s machine shop,” he recalls-before he perfected the triangular shape, which places the magnets closer together than its circular predecessor did, creating a stronger magnetic field.

The design nailed, Minica last year became a semifinalist in the History Channel’s Modern Marvels Invent Now Challenge. Now he’s tweaking an upgrade, which has a slot on the top for quick loading. It took nearly three years to adjust for the magnetic-field distortion caused by the small opening. But Minica doesn’t mind. “Someone a long time ago realized that you could store energy in a curved limb of a tree and launch a projectile,” he says. “Five thousand years later, it’s neat to be a part of its improvement.”