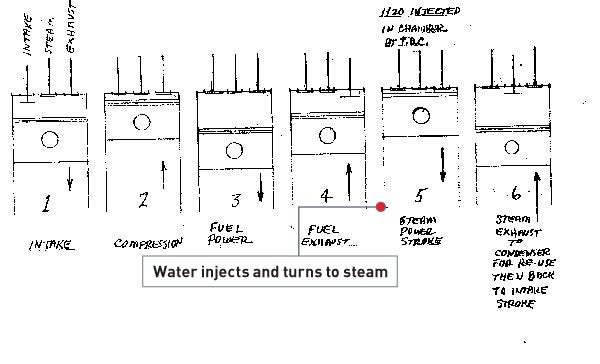 After the first four conventional strokes, water is injected into the cylinder, creating steam to drive a fifth stroke for extra power. The last stroke recycles the steam water.

We’re currently rolling out the winners of the 2007 PopSci Invention Awards. We’ll be doling out a new innovation each day, so keep checking back for more of what the world’s brightest inventors are currently cooking up. And if you just can’t wait, pick up a copy of the June issue that just hit the stands.-Eds._

Bruce Crower’s Southern California auto-racing parts shop is a temple for racecar mechanics. Here’s the flat eight-cylinder Indycar engine that won him the 1977 Louis Schwitzer Award for racecar design. There’s the Mercedes five-cylinder engine he converted into a squealing supercharged two-stroke, just “to see what it would sound like,” says the now half-deaf 77-year-old self-taught engineer.

Crower has spent a lifetime eking more power out of every drop of fuel to make cars go faster. Now he’s using the same approach to make them go farther, with a radical six-stroke engine that tops off the familiar four-stroke internal-combustion process with two extra strokes of old-fashioned steam power.

A typical engine wastes three quarters of its energy as heat. Crower’s prototype, the single-cylinder diesel eight-horsepower Steam-o-Lene engine, uses that heat to make steam and recapture some of the lost energy. It runs like a conventional four-stroke combustion engine through each of the typical up-and-down movements of the piston (intake, compression, power or combustion, exhaust). But just as the engine finishes its fourth stroke, water squirts into the cylinder, hitting surfaces as hot as 1,500