Video: Robot Hand Beats Humans at Rock-Paper-Scissors One Hundred Percent of the Time

So much for best two out of three. A robotic hand developed by engineers at the University of Tokyo will... 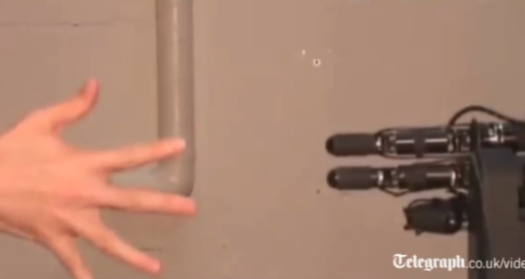 So much for best two out of three. A robotic hand developed by engineers at the University of Tokyo will take you at rock-paper-scissors three out of three times. Then it will do it again, for as long as you car to challenge. Thus far, it hasn’t lost a game.

There’s no algorithmic wizardry or predictive computation here. The robot’s edge is purely visual. Super-fast motion sensing technology can “see” and evaluate what hand gesture a human is making in just one millisecond. One millisecond after that it makes its play–conveniently and 100 percent of the time the play that trumps whatever the human throws down. It all happens so fast as to be imperceptible to the human eye. Add it to the list of things robots simply do better.