Turning Microsoft’s $150 Kinect Into a $50,000 Piece of Surgical Equipment 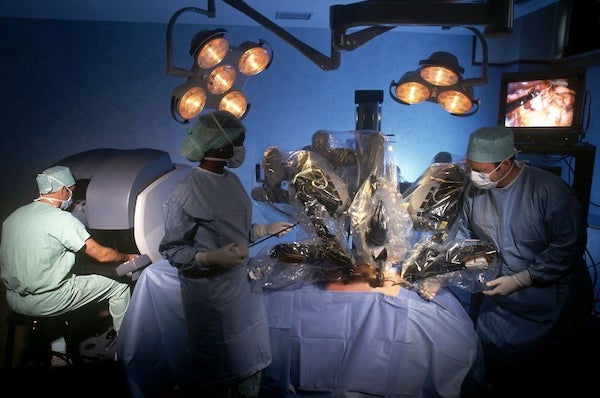 Surgical robots might allow precise operation in tiny places our unwieldy human hands can’t go, but using those robots removes the surgeon’s valuable sense of touch. At the University of Washington, a group of engineering students decided to use a hacked Microsoft Kinect to give that sense back.

Engineers and scientists have been working for years to fix the inherent lack of touch sensitivity that goes along with using surgical robots. The sense of touch is tremendously important to a surgeon; without it, you could easily nick an artery or drag along bone without realizing it. The solution is to implement some kind of force feedback, kind of like a more detailed version of the rumbling or vibrating you feel while playing videogames. That led this group of University of Washington graduate engineering students to one of our favorite pieces of gaming hardware, the Microsoft Kinect.

To add force feedback, surgeons need a highly detailed, live-updating, 3-D scan of whatever is being sliced and/or diced. That equipment is normally exceedingly expensive, done with CT scanners or what have you, but the UW team lit on a much cheaper and easily hacked substitute: the Kinect. The Kinect senses 3-D environments by spitting out thousands of tiny infrared dots and then measuring the rebounding light–exactly what they need for this purpose, and at the price of $150. The Kinect has other advantages as well: They can assign “off-limits areas,” around, say, vital organs, so the tools can’t venture in and cause undue damage.

Before the Kinectified robots are actually used in surgery, some adjustments will have to be made. The Kinect’s relatively low-resolution 640 x 480 cameras will have to be upgraded, and the sensors will have to be scaled down to focus on the comparatively small area of surgery (compared to, you know, the giant living room the Kinect normally requires). But the team definitely plans to move forward–after all, a few simple upgrades will still make the contraption both cost-effective and really cool.

[The Daily (University of Washington) via Kotaku]