Today in pretty space pics: Hubble captures the brightest star-forming region in the neighborhood, a particularly prolific segment of the... 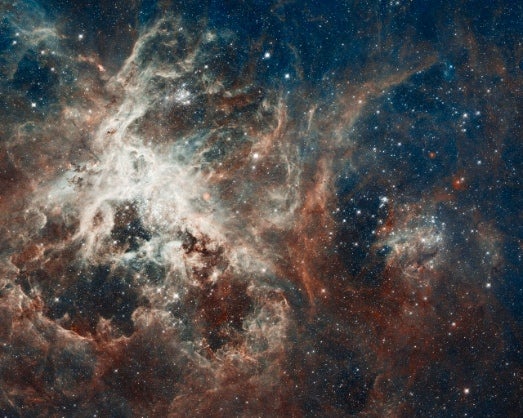 Today in pretty space pics: Hubble captures the brightest star-forming region in the neighborhood, a particularly prolific segment of the nearby Large Magellanic Cloud that is home to the most massive stars ever observed from Earth. The image above, hemming in some 650 light-years of space (horizontally), contains one of the fastest rotating stars ever seen as well as the fastest runaway star. In other words, there is no lack of action here in 30 Doradus, at the center of the Tarantula Nebula.

The Large and Small Magellanic Clouds are satellite galaxies of our own Milky Way situated some 170,000 light-years away. That makes it a great candidate for observation, as it’s close enough for instruments like Hubble to resolve individual stars. Though larger starbursts have been seen from other galaxies, the Large Magellanic Cloud (and features like 30 Doradus) allow astronomers to observe star birth and evolution in detail.

And it turns out birthing stars is what 30 Doradus and the rest of the Large Magellanic Cloud does best. In 30 Doradus astronomers can observe stars at various points in their life cycles, from infant stars just a few thousand years old to huge young stars that are already approaching supernovae. The image above shows stars aged anywhere from 2 million to roughly 25 million years old.

The most prominent feature above is the star cluster known as NGC 2070, which alone holds about half a million stars. The region is just 2 million to 3 million years old, filled with hot massive stars that have yet to completely burn their way through the huge hydrogen gas cloud that birthed them all. Over time, the stars there will carve their way out via their massive outputs of ultraviolet radiation, likely spawning even more star birth in the process.

The image above, released to celebrate Hubble’s 22nd birthday, is a mosaic stitched together from 30 separate fields–15 each from Hubble’s Wide Field Camera 3 and its Advanced Camera for Surveys. That data was supplemented by observations made by the European Southern Observatory with telescopes on the ground. Get a high-res version here.