Small colonies of swimming magnetic particles can self-assemble into micro-machines that can manipulate other particles, scientists report. The particles can... 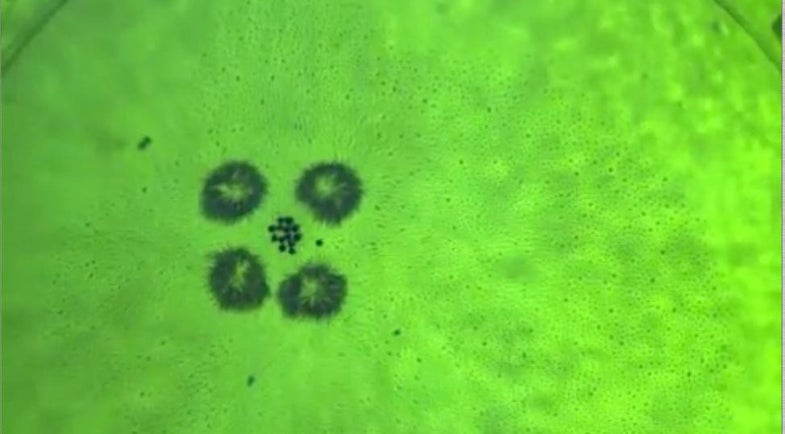 Small colonies of swimming magnetic particles can self-assemble into micro-machines that can manipulate other particles, scientists report.

The particles can be remotely controlled to grasp and move other objects, which could enable precise and delicate fabrication processes that were previously not possible with machines.

The ferromagnetic particles are sandwiched between layers of water and oil, and they float around aimlessly in the absence of a magnetic field, according to researchers at Argonne National Laboratory. But when an alternating field is applied perpendicular to the liquid, the particles glom together into spiked circular shapes, which the researchers nicknamed asters (after the flower with similar appearance). The star-shaped formations deconstruct when the current is switched off.

Another magnetic field parallel to the surface manipulates the vortices around the asters, which makes the particles swim. Changing this magnetic field alters their movement, according to Alexey Snezhko and Igor Aronson, physicists at ANL. This allows them to be precisely controlled so they can complete certain tasks, Snezhko said — they’ve dubbed the asters “micro-robots.”

The asters can swim around, open wide like Pac-Man and hug another object, transporting it to another spot. Watch the video below, wherein one aster curls up and transports a small glass bead across the field of view, with gracefully organic movement. The glass bead weighed four times that of the self-assembled aster, according to an ANL news release.

Most robots have a hard time gripping delicate objects; the balance between sensitivity and a forceful grasp is a major challenge for roboticists. So the ability to grasp tiny fragile objects could make the asters useful for microscale manufacturing.

The same team previously developed self-organizing filament chains that served as magnetic snakes, which involved magnetic microparticles floating on water. But those were too big, because the density difference between the water and the air above was too great, as Wired Science points out. In this case, the use of two liquids — oil and water — allowed Snezhko and Aronson to create smaller structures.

So far, the researchers can manipulate the asters to carry particles as small as 150 microns and as large as 3 millimeters, within sub-millimeter accuracy, Wired reports. They could someday be used for a wide range of processes, from fabrication to medicine. The research is published in Nature Materials.