We’ve already seen how future ships can be cloaked against sonar, and maybe someday even space and time. Now researchers... 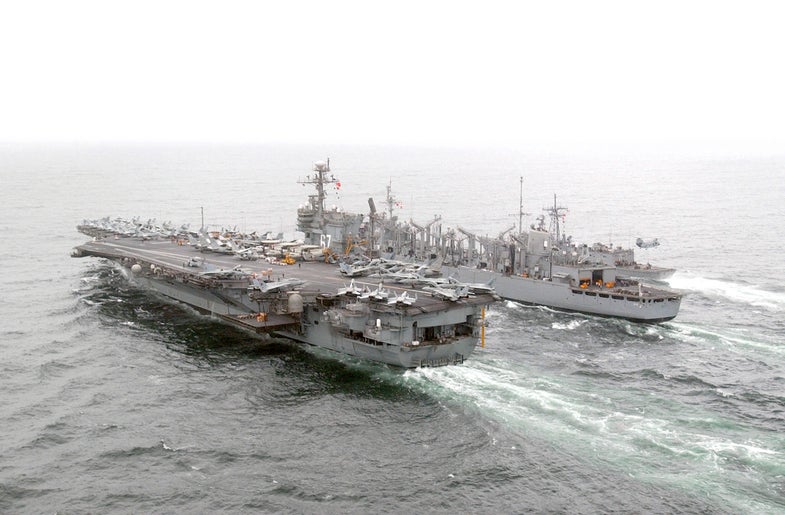 We’ve already seen how future ships can be cloaked against sonar, and maybe someday even space and time. Now researchers say they can cloak the ships’ wakes, tricking water itself into acting as though nothing is there.

A new metamaterial cloaking system can trick water into standing still as an object moves through it, by eliminating the shear force and reducing water displacement, Duke University researchers say. This in turn reduces the amount of energy required to move an object — say, a ship — through the water, theoretically saving fuel.

Yaroslav Urzhumov, assistant research professor in electrical and computer engineering at Duke, envisions covering the hull of a ship with a three-dimensional lattice of porous metallic materials that would be embedded with tiny pumps. The pumps could force flowing water through at variable rates, Urzhumov says in a news release. “The goal is make it so the water passing through the porous material leaves the cloak at the same speed as the water surrounding by the vessel,” he says.

The water surrounding the hull would appear to be still, relative to the movement of the vessel, which would reduce the amount of energy the vessel needs to get through it. When moving through a fluid, a solid object displaces a greater volume of fluid than its own total volume — think of how much effort it requires to drag a thin fishing line through water. So if these shear forces could be eliminated or mitigated, a moving vessel would displace less fluid.

We’ve seen other examples of ship-efficiency water interference tech lately, including a proposal to harness the Leidenfrost effect, wherein a liquid produces an insulating vapor layer when it comes in contact with a solid object that is hotter than its boiling point. That vapor layer could reduce drag, researchers say. But superheating hulls would likely require lots of energy input, lessening any energy savings from the drag reduction.

A lattice-pump system would conceivably be better, because the micropumps wouldn’t need that much power, Urzhumov says — certainly not as much energy as you would need to push an un-cloaked ship through the seas. The research is reported in the online version of Physical Review Letters.