At the Vienna Institute of Technology, a group of engineers claims they’ve created not only the world’s smallest 3-D printer,... 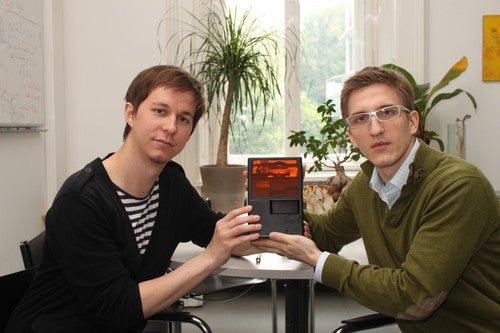 Markus Hatzenbichler and Klaus Stadlmann with their micro-printer. Vienna Institute of Technology
SHARE

At the Vienna Institute of Technology, a group of engineers claims they’ve created not only the world’s smallest 3-D printer, but also one that’s so light and inexpensive that it could conceivably pave the way for truly domestic 3-D printing. Lost an earring or a cuff-link? Print one out (and congratulations on your fancy life). That’s the future, and it might not be far off at all.

3-D printer manufacturers sometimes think big, but there’s just as much of a movement to think small, to bring this sort of fabrication to the masses. Our roundup of 3-D printing dream projects includes both–Enrico Dini may want to put a 3-D printer on the Moon to build houses out of moon-dust, but Hod Lipson wants cheap 3-D printers in every classroom. This project, hailing from Vienna, is more in the second group.

The university claims this is the world’s smallest 3-D printer, designed to print with a special kind of synthetic resin that instantly and precisely hardens when hit with an intense beam of light. That gives it the ability to print very intricate as well as very sturdy objects. It uses a focused beam of light, hardening layers only a twentieth of a millimeter thick, which is delicate enough that the university says it can be used to print finicky objects like hearing aid parts.

The team says the prototype is “no bigger than a carton of milk,” about 3.3 pounds in weight, and can be sold for 1200 Euros (about $1,700 USD). The size and price are both flexible, and could go down if the printer sees mass demand. No word on whether they’ll attempt any sort of mass production, but this is a pretty intriguing look at our future. It’s not hard to imagine a 3-D printer on every counter, alongside the food processor and coffee machine. In fact, it’s great fun to imagine that.