NASA’s youngest space shuttle left Earth for the last time Monday, carrying a physics experiment and spare parts to the... 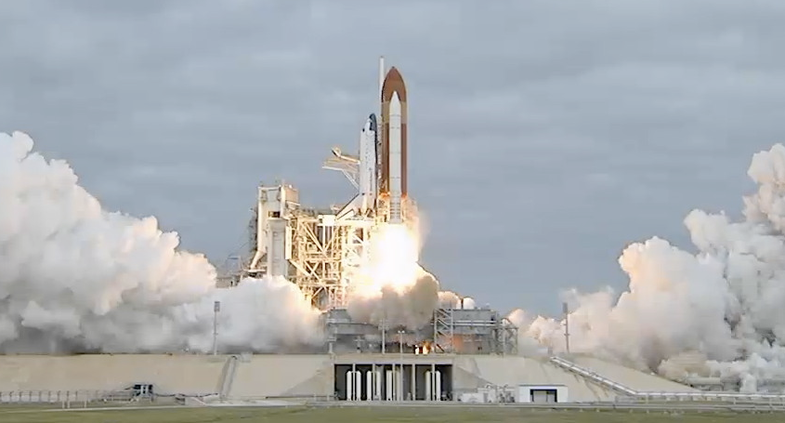 NASA’s youngest space shuttle left Earth for the last time Monday, carrying a physics experiment and spare parts to the International Space Station. It was a bittersweet moment for shuttle followers who watched the shuttle’s picture-perfect liftoff with the knowledge that there’s only one of these left.

Commander Mark Kelly had some poignant words in the moments before ignition.

“As Americans, we endeavor to build a better life than the generation before and we endeavor to be a united nation,” Kelly said. “In these efforts we are often tested. It is in the DNA of our great country to reach for the stars and explore. We must not stop.”

This was at least in part a tacit reference Kelly’s wife, U.S. Rep. Gabrielle Giffords, who was critically injured in a shooting rampage at a town hall meeting with constituents earlier this year. Giffords attended the launch.

The shuttle was supposed to launch two weeks ago, but engineers found an electrical problem in a heating system designed to keep one of the spacecraft’s power systems warm in space. They replaced some electrical wiring and tested the system before giving the green light for launch on Monday morning.

Endeavour will dock with the ISS Wednesday morning. The 16-day mission includes four spacewalks, in which astronauts will deliver spare parts for the Dextre robot, new communications antennae and a high-pressure gas tank. The shuttle is also delivering the Alpha Magnetic Spectrometer, which will search for dark matter and other cosmic phenomena.

The crew is leaving behind a piece of their ship — Endeavour’s orbiter boom sensor system, which could serve as an extension for the station’s robotic arm. After Endeavour undocks, Kelly and pilot Greg H. Johnson will ease the shuttle back toward the station to test a new docking system that could help a future shuttle replacement.

Endeavour is carrying two first-time astronauts and the final international astronaut to fly on the shuttle. The last mission, Atlantis’ June 28 launch, will be crewed by Americans.