Video: Remote-Controlled Car That Runs on Aluminum Soda Can Tabs

You know how much fun it is to break off the opener tab of a soda can and drop it... 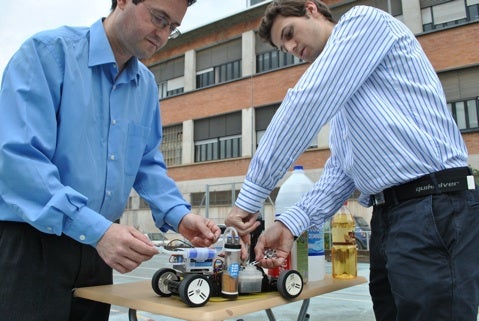 You know how much fun it is to break off the opener tab of a soda can and drop it into the can once you’re done with the soda? (So much fun!) Well, two Spanish engineers have taken that experience one step further. Their DAlH2Orean remote-controlled car runs on a combination of recycled aluminum soda can tabs and sodium hydroxide, creating a zero-emissions hydrogen vehicle.

Created by Aleix Lovet and Xavier Salueña of the Polytechnic Institute of Catalonia, the DAlH2Orean has the honor of being the world’s first remote-controlled car to run on aluminum soda can tabs. Essentially, the car uses hydrogen power generated from a chemical reaction in which the aluminum tabs are mixed with a solution of sodium hydroxide and water. The hydrogen generated from this reaction powers a hydrogen fuel cell, which in turn powers the car. The energy is clean, with no CO2 emissions at all. The full reaction is slightly more complex than that, involving a few filters (silica gel to remove moisture, vinegar to remove hydroxides), but that’s the basic idea.

The car itself is capable of running nearly 20mph, with a range of about 40 minutes, which is pretty impressive given how small it is. The duo that created the project hopes to eventually create “microcars” with much more power, yet the same zero-emissions attributes. We just have to wonder if those teeny London black cabs count as “microcars.”