The Age of the Avatar Has Arrived, Letting You Go Everywhere Without Going Anywhere

Getting up for class or an early meeting always goes the same way: you get out of bed, and it... 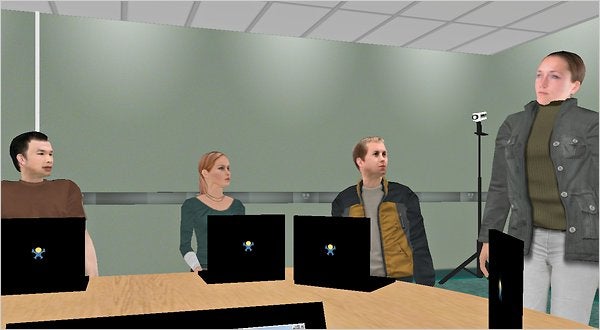 Getting up for class or an early meeting always goes the same way: you get out of bed, and it goes downhill from there. But if a couple of researchers from Stanford and UC Santa Barbara are correct in their new book, in a few years we’ll all be meeting in virtual classrooms and conference rooms anyhow. This isn’t just the same old future hype, they say; technology has caught up with the vision, and the age of the avatar is imminent.

Which technology? Specifically, Drs. Jim Blascovich (of UCSB) and Jeremy Bailenson (of Stanford) cite the Microsoft Kinect, the Nintendo 3DS, and IBM’s Watson computer. They call these technologies “paradigm-shifting” for avatar conferencing and say that they make virtual meetings ready for the living room, classroom, and conference room.

This isn’t like videoconferencing–it’s far more immersive–nor is it like two avatars chatting in two-dimensional environs like Second Life. Essentially, you would use a photo to generate a true 3-D avatar to your liking–perhaps one that’s had a shower and dresses a bit more smartly than you do–and you and each of your meeting-mates would sit around looking, gesturing, and talking to each other in 3-D.

But it gets better. The Watson piece of the technology means avatars could be put on a kind of autopilot, where an AI takes over your digital presence, nodding politely at good points, laughing at jokes, and otherwise feigning attention while you hit the snooze button for the seventh straight time.

You could even tamper with your physical traits, Blascovich and Bailenson say, to make a better impression. Research shows that when a person’s face is subtly digitally morphed with that of a politician’s in an image, the person receives that politician more warmly even if they don’t share simpatico political views. The person won’t even realize the photo has been altered.

That means you could doctor your own features to exhibit some of those of a professor, a client, or a superior to gain a little extra goodwill. Of course, that might be considered unethical. Since you’re already sleeping straight through your 8:30 while some AI keeps your avatar nodding attentively, you might not want to push it.