Meet iMobot, a new reconfigurable robot that can be linked together like a chain to form larger versions of itself.... 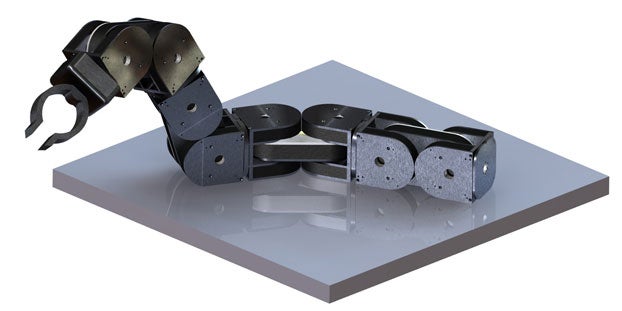 Meet iMobot, a new reconfigurable robot that can be linked together like a chain to form larger versions of itself. With four degrees of freedom, it can stand itself up and turn into a tiny camera stand, roll end-over-end like a mini tank tread, or hunch along like an inchworm.

Researchers at the University of California-Davis have applied for a patent on the robot, which they say could be used for search and rescue operations as well as robotics research.

Its two modules have two joints at the center, which can rotate 180 degrees, and two rotating faceplates at each end, as the researchers explain. The faceplates turn continuously, allowing the robot to roll along as though it were driving. Future research will explore clusters of iMobots working together in even larger modular platforms.

Creators Graham Ryland and Harry Cheng received a $150,000 National Science Foundation grant to start Barobo Inc., a business aimed at commercializing the iMobot. You can find out how to get one here.

Modular robots could be a more cost-effective way to build robot helpers for a variety of tasks, like search-and-rescue snakebots or tree-climbing spy cams. The inventors hope it will be for sale by the end of the year.