We are all made of stars, and that’s not just a Moby-ism. The stuff of the cosmos is also the... 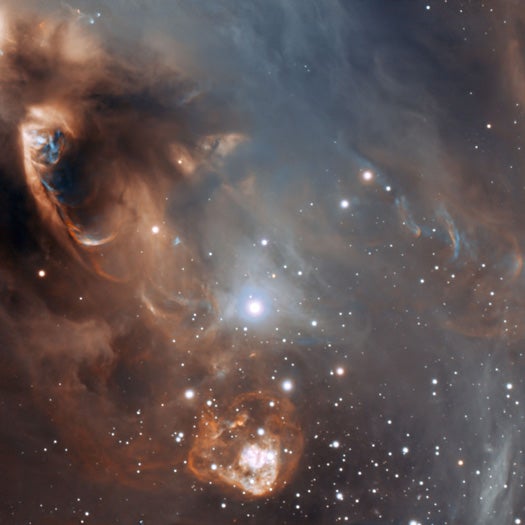 We are all made of stars, and that’s not just a Moby-ism. The stuff of the cosmos is also the stuff of life, so it’s interesting to look at ourselves and then at an image like the one above–a violent star birthing region filled with swirling, super-heated gas and dust–and ponder what possible futures might be spawning there. This newly released image from the ESO’s Very Large Telescope shows in detail the effect that newly minted stars have on the very gas and dust from which they are formed.

The actual stars of interest here aren’t even visible; They are obscured by dust and gas through which visible-light telescopes can’t see. But we know they are there (in the upper left of the image) because of the high-speed jets of matter they send spewing across the scene at speeds topping 600,000 miles per hour.

The image is a composite of two different images taken with different filters, one isolating the orange of glowing hydrogen, the other the blue of ionizing sulpher. This gives astronomers a good idea of what’s going on even though the stars aren’t visible–where ionizing sulpher glows bright blue, the ejecta is moving relatively slowly, whereas the bright orange areas indicate hot hot hydrogen gas. So while the image may appear serene in its stillness, all those glowing arcs and bulges are actually chaotic collisions of super-hot, super-fast gasses and their resulting shockwaves.

Click through the link below for a high-res version.