It’s one thing for humans to make robots, but the idea of robots making robots tends to conjure all those... 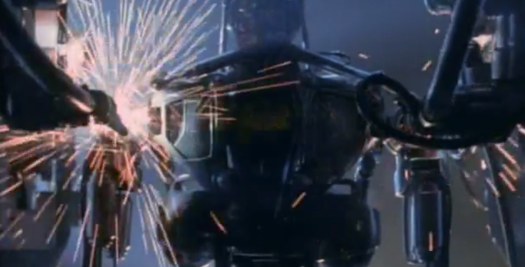 It’s one thing for humans to make robots, but the idea of robots making robots tends to conjure all those sci-fi scenarios wherein Arnold Schwarzenegger or Keanu Reeves have to save what’s left of humanity. Nonetheless, the U.S. military presses on. According to this proposal, as Danger Room points out, the Navy is pursuing technologies that would allow swarms of semi-autonomous ‘bots to interact, team up, and manufacture things via 3-D printing tech.

In other words, the Navy wants robots that can make, among other things, more robots. And it wants to give the robots the capability to do it quickly wherever they are operating, via rapid prototyping machines that can churn out parts assembly line style in a variety of materials, including “multi-functional materials, programmable materials, metamorphic materials, extreme materials, heterogeneous materials, synthetic materials, etc.”

As DangerRoom notes, things like “programmable” and “metamorphic” materials are very SkyNet indeed, but it what the Navy is really looking for from its robots is increased flexibility. According to the proposal:

Each micro-robot would perform a specific task, often a single rudimentary task, repeatedly. Collectively, these tasks would be choreographed in purposeful activities for manufacturing. A micro-robot swarm should be able to perform material synthesis and component assembly, concurrently.  The micro-robots could be designed to perform basic operations such as pick and place, dispense liquids, print inks, remove material, join components, etc. These micro-robots should be able to move cooperatively within a workspace to achieve highly efficient synthesis and assembly.

Such a self-contained robotic factory could be extremely useful aboard the Navy’s floating fortresses, for instance, allowing crippled vessels to manufacture critical parts to repair themselves or their constituents (like on-board aircraft) at sea or for the creation of mission-specific hardware on-demand, cutting down on the reliance on lengthy maritime supply chains.

But we should probably ready the electromagnetic pulse weapons. You know, just in case.