How It Works: The Light-Driven Computer 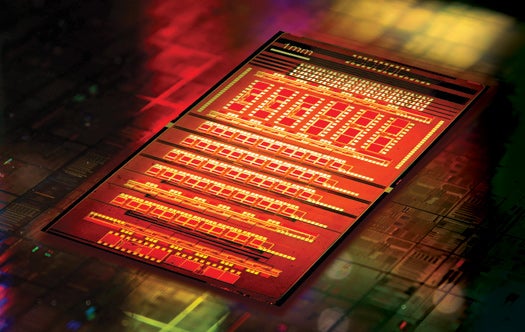 The speed of light is as fast as it gets, and IBM researchers are exploiting that fact to give supercomputers a boost. They’ve made the smallest-yet silicon chips that use light to transmit information.

Most parts of the chip resemble those found on any other commercial chip. The parts that process or transform information—in other words, the parts that do the actual computing—still deploy electrons moving through semiconductor gates. But the interconnects, the lines that shuttle information between different areas within a chip, are drastically different. Instead of shuttling electrons, which can slow down significantly when the interconnects heat up, they shuttle light. That’s because light is easy to contain and loses less information as it travels. The researchers hope that this quick communication will make possible the first exascale computers—that is, computers that can perform a billion billion computations per second, 1,000 times as fast as today’s speediest systems.

One other benefit, says IBM engineer Will Green: The optical interconnects use significantly less power, making them cheaper to run. That’s particularly important given that supercomputers typically consume megawatts of power during operation. IBM, which has already made a working prototype, says a commercial version of the chip will debut in a supercomputer in around 2018.

This month’s How It Works section is brought to you by Digi-Key. All posts are purely editorial content, which we are pleased to present with the help of a sponsor; the sponsor has no input in the content itself.