Taking cues from the awesomely named black ghost knifefish, researchers at Northwestern University have created a robotic fish that can... 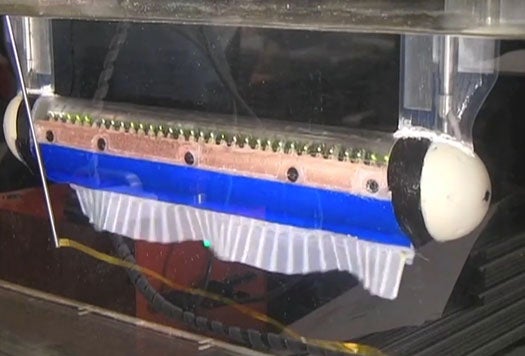 Taking cues from the awesomely named black ghost knifefish, researchers at Northwestern University have created a robotic fish that can swim both forward and backward while also maneuvering vertically using a novel ribbon-like fin. Such agility and range of motion is unheard of in most underwater robots, and the development could lead to far more nimble robots for submerged operations (like capping undersea oil wells).

The black ghost knifefish isn’t like most fish. An Amazon basin-dwelling nocturnal predator that hunts via a weak electric field around its body, it maneuvers both forward and backward via a ribbon-like fin on its belly. Robotics engineers at Northwestern noted the fishes ability to quickly maneuver vertically in water and wanted to get to the bottom of the fin’s design, viewing it as a potential way to improve the maneuverability of undersea robots.

Computer simulations of the black ghost knifefish showed that the fish moved forward or backward using a single traveling wave along the fin on its underside—if the wave traveled one way down the fin it went forward, if the wave traveled the other way it went backward.

But when moving vertically, the researchers found the fin doing something unexpected: crashing two waves moving in opposite directions into each other. One wave traveling tail-to-head and one wave traveling head-to-tail would collide and stop at the center of the tail, canceling the horizontal thrust in either direction and turning it to downward thrust that allows the fish to move vertically.

Born of this unique finding was GhostBot, a small submersible boasting a biomimicking fin on its underside just like the black ghost knifefish. Thirty-two separate motors give independent control to the 32 artificial fin rays that are wrapped in an artificial lycra fin. GhostBot also boasts an electrosensory system similar to that of the real knifefish that, hopefully, will allow it to position itself as precisely as the real deal using it’s fin. Check out GhostBot working out its ribbon fin below.