How To Fix Radio Blackout During Spacecraft Reentry: A Giant Plasma Sheath Antenna 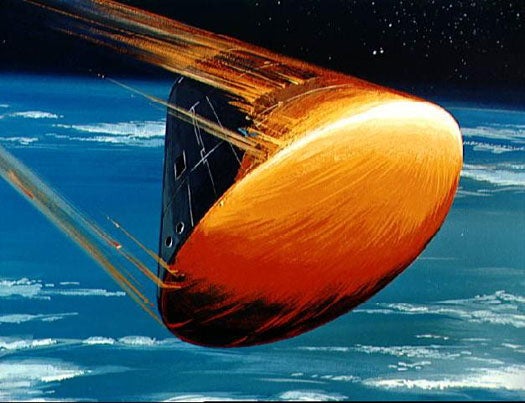 Watch those old videos of the Apollo missions (or movies about the Apollo missions), and the nail-biting, climactic moment is always spacecraft reentry, where the incoming craft comes screaming through the atmosphere in a burning ball of white-hot plasma resulting in a total radio blackout. But a team of Russian scientists say they’ve found a way to communicate through the plasma sheath that causes radio blackout by turning the sheath itself into a giant plasma antenna.

Reentry blackout occurs when the high speed of the spacecraft obliterates atmospheric molecules, developing a plasma envelope that absorbs electromagnetic waves that are close to a certain frequency called the plasma frequency. That plasma frequency in turn depends on the plasma itself, which can range in density. The resulting breakdown of radio communications is an annoyance for space mission crews and mission personnel, but for military space planes and ICBMs, it can block out navigation signals or even an abort command.

The same principle should work with transmissions going the other directions. That is, if it works at all. It certainly is a clever solution – take the object obscuring communications and turn it into a huge communications antenna – but so far it’s a notion that works only on paper. If it works in practice, it could take that harrowing couple of minutes out of human spaceflight and mitigate military mistakes with disastrous consequences.

For the gritty details, check out the paper at arXiv.