Who says America isn’t a manufacturing economy anymore? The country has already dedicated her first commercial spaceport, and yesterday construction... 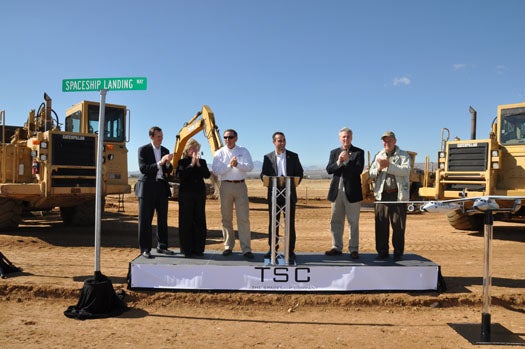 Who says America isn’t a manufacturing economy anymore? The country has already dedicated her first commercial spaceport, and yesterday construction kicked off on her first commercial spaceship factory. The nearly 70,000 square foot facility, home of the The Spaceship Company, will build Virgin Galactic’s fleet of White Knights and SpaceShips, the carrier craft and rocket planes (respectively) that are expected to be ferrying passengers to the edge of space sometime late next year.

The Spaceship Company (TSC) is a joint venture owned by British billionaire Richard Branson’s Virgin Galactic and Scaled Composites, the aerospace firm founded by legendary engineer Burt Rutan the visionary behind Virgin Galactic’s fleet. TSC is being constructed at the Mojave Air and Space Port and will hopefully be completed by September.

The facility is expected to turn out three White Knight carrier aircraft and five of the smaller SpaceShip rocket planes. TSC has already begun hiring engineers and technicians and will employ as many as 170 people once production begins. How’s that for creating jobs in innovative new industries?