Bored By Non-Glowing Skin? Ultra-Flexible, Waterproof LED Implants Are What You Seek

LEDs are, on small scales, the cheapest, most reliable, and most technologically powerful light sources out there. But their true...

LEDs are, on small scales, the cheapest, most reliable, and most technologically powerful light sources out there. But their true potential is finally being unleashed. A new generation of LEDs can go anywhere – even into your body. 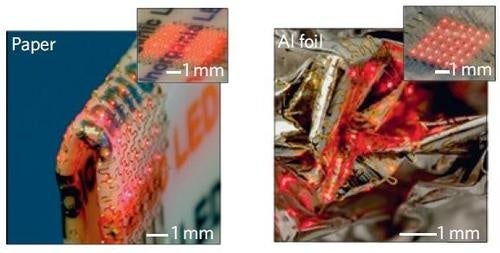 LED Lights Can Be Extraordinarily Small

LEDs, or light-emitting diodes, are often used for text and video displays, and their infrared counterparts are everywhere in remote control technology. You can’t take a trip without running into an LED – traffic signals are all LEDs, as are most of the lights on a car dashboard. And anyone who has been to a rock concert has probably run into a few people going crazy with LED-powered glowsticks.

Still, as researcher John Rogers of the University of Illinois points out, LEDs are brittle, meaning they can’t be bent into different shapes. Well, no more, thanks to his new invention. He and his team have put tiny LEDs, each one smaller than the tip of a pen, on flexible electronic sheets. These sheets can be stretched and twisted up to 720 degrees without any loss in LED function, and they can hold up under soapy water or even underneath the skin, which they demonstrated by implant one sheet under the skin of mice. 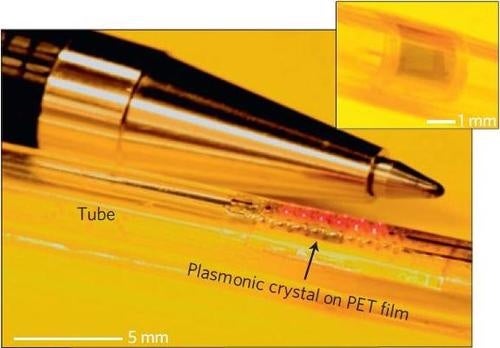 Each LED Used Is Smaller Than The Tip of a Pen

As scientist’s tend to do, Rogers looks at this from the perspective of how it might benefit humanity. He sees great potential applications in using implanted LEDs for diagnostic purposes, and putting his LEDs on surgical gloves could allow doctors an even better view at what they’re operating on. 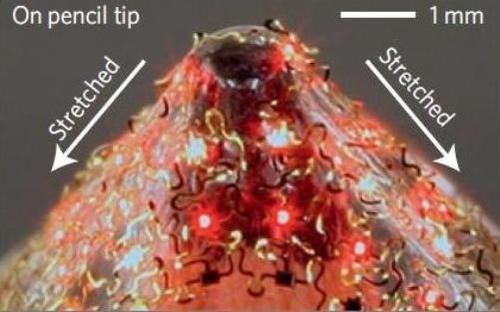 New LED Material Could Be Malleable

But let’s be real here – the crazy awesome applications of this invention way outstrip the humanity-benefiting ones. Implanted LEDs can be the new tattoo – put red ones down your spine for the sexy Cylon look!) Take your boring old household pets and stick some LEDs in them – instant excitement with glowing kitties and puppies! New glowsticks could be twisted 720 degrees to look like double helixes of DNA and handed out to biologists, giving scientific conferences a refreshingly heavy metal feel. And you just know somebody is figuring out how to put these things on a condom.

What crazy ideas do you have for these ultra-flexible LEDs? Here are some more awesome pictures of Rogers’s LEDs in action to get your creative juices going.