There’s something exhilarating about meeting someone new, whether it’s in a coffee shop or online. That is, until your new... 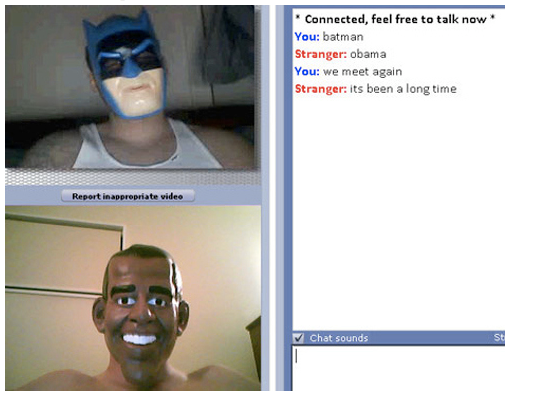 New software might make it easier to block out all the penises on Chatroulette. Then you could spend more quality time with Batman and Barack Obama. via Buzz Feed
SHARE

There’s something exhilarating about meeting someone new, whether it’s in a coffee shop or online. That is, until your new pal pulls a Lyndon Johnson and gets really friendly.

That sort of behavior is pretty common on Chatroulette, where users can “meet” and chat with random people with a click of a mouse. But to cut down on the parade of penises, the service is planning to add image-recognition software that will filter out shots of male genitalia, TechCrunch reports.

Changes could also include a system that flags users who are consistently “nexted” — skipped past — presumably because they are exposing themselves or otherwise being disgusting.

TechCrunch also reports that Napster founder Shawn Fanning is working with Chatroulette’s founder, Andrey Ternovskiy, in an uncompensated advisory role. It’s not clear what Fanning is doing, but his credibility among social media users and investors couldn’t hurt.

The story also quotes unnamed “interested investors” who advise that Ternovskiy needs to clean up his site before it is forever linked to creepiness. Only recently has it become easier to cut off offensive users; a New Yorker profile last month noted that Ternovskiy made some changes after Ashton Kutcher berated him about what his stepdaughter had seen on the site.

Chatroulette has long featured the rawest side of humanity — copulating couples, men taking their pants off, and so on. But it also allows for a potentially rewarding (and potentially lucrative) random human connection, and that’s what interests investors.

Although, come to think of it, there might also be a market for software that can quickly scan for penises and not filter them out.