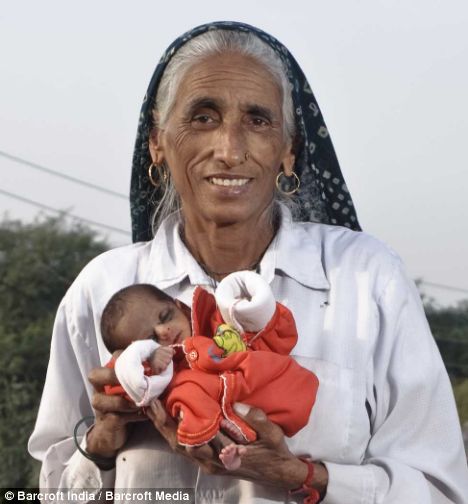 The oldest woman to give birth, at age 70. Barcroft Media
SHARE

Rajo Devi Lohan gave birth to her daughter at age 70. Now, 18 months later, she is dying of old age.

Rajo, a poor villager in northern India, gave birth to daughter Naveen a year and a half ago after undergoing in-vitro fertilization, reports FOX News. She and her husband Balla took out $3,000 in loans for the procedure. Rajo’s womb ruptured during the Caesarean birth, however. And now, her child barely walking, she is bedridden.

Back in the 1980s, doctors would not accept women over 40 for IVF treatments. But as more women put off childbearing, doctors discovered older women could carry IVF pregnancies using harvested donor eggs — and they often did just fine with them.

In 1994 notorious Italian fertility doctor Severino Antinori made headlines when he got a 62-year-old pregnant — making menopause little more than an awkward complication.

Since then, the number of new mothers who are collecting pensions has become too numerous to list. China has a 60-year-old mother, while an American great-grandmother recently gave birth at 62. The U.K., for its part, made headlines in 2006 with a woman who delivered at 62.

But advances in health care and treatments to slow the effects of aging have not kept pace with the explosion in late motherhood. Sooner or later we’ll have to face a sticky question: when is a woman too old to raise a family? And should that age be adjusted for countries like India, where life expectancy is just under 64?

Rajo’s case is not the first of its kind — and it certainly will not be the last. Last year saw the death of a Spanish woman who gave birth at 66 after lying to a California fertility clinic about her age. She left behind two-year-old twins.