After a good deal of hand-wringing and breath-holding, NASA engineers have finally brought the Solar X-Ray Imager (SXI) on the... 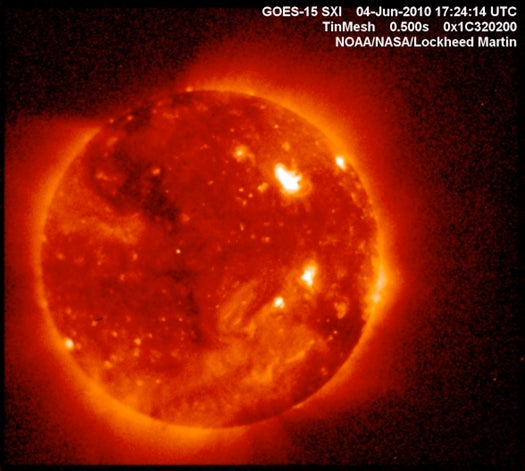 After a good deal of hand-wringing and breath-holding, NASA engineers have finally brought the Solar X-Ray Imager (SXI) on the GOES-15 satellite (formerly called GOES-P) online, to return its first detailed images of the sun to Earth.

The Goestationary Operational Environmental Satellite was launched March 4, but when they tried to turn on SXI what appeared to be a short in the instrument’s circuitry caused the instrument to receive lower-than-necessary voltages, among other problems. On June 3 engineers finally got the instrument online and it seemed they had fixed the problem, but they weren’t completely sure until the first images came back from SXI.

Those images, aside from being quite beautiful, are very important to space weather observers like NASA, the NOAA, the FAA, and even the Department of Defense. At a space weather conference held just last week in Washington D.C., NASA and other leading space weather researchers warned that in 2013 the sun’s 22-year magnetic energy cycle will peak at the same time its 11-year cycle of solar flare activity also hits its maximum.

The resulting rise in solar radiation could potentially knock out power grids, disable electronic devices, and disrupt satellites, though its worth noting that while the threat is elevated none of this is particularly likely. But a worst-case scenario floated by the National Academy of Sciences a couple of years ago warned that intense solar activity could possibly cause economic damage 20 times worse than that of Hurricane Katrina.

The point being it doesn’t hurt to keep an eye on what’s happening on the solar surface, and GOES-15’s SXI, along with other instruments like the Solar Dynamics Observatory, are key to doing exactly that.