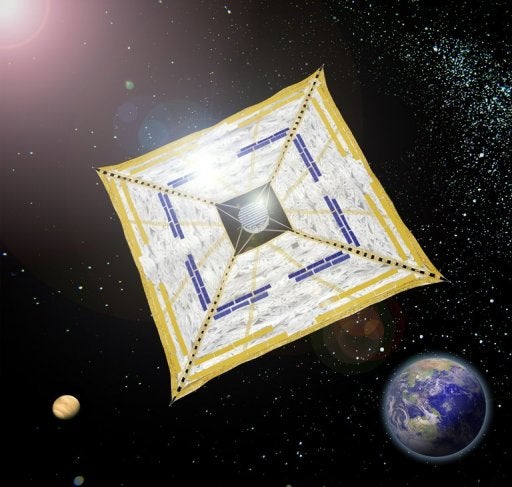 After lots of talk and testing, Japanese researchers are ready to go space sailing. Japan Aerospace Exploration Agency (JAXA) announced its intention to launch its first “space yacht” propelled by solar sails into the heavens on May 18. Ikaros — the Interplanetary Kite-craft Accelerated by Radiation of the Sun — will cruise through the solar system powered by solar particles that bounce of its giant, ultra-thin sails.

Ikaros — which aside from being a somewhat clumsy acronym is also an allusion to the Greek mythological character who flew too close to the sun — marks the first time a space craft will enter deep space towed by solar sails, which provide a fuel-free means to explore the solar system provided the craft is near enough the sun to catch a particle powered breeze. Several prototype space sails have been unfurled in orbit by various agencies including NASA, but as far as long-term propulsion is concerned the Ikaros mission is solar sailing’s coming out party.

Ikaros’s 46-foot flexible sails are thinner than a human hair and equipped with thin-film solar cells that will generate power for the craft, which mission controllers on the ground will steer by making adjustments to the angle at which incoming radiation strikes the sails. Such technological strides haven’t come cheap; JAXA has already poured $16 million into the vehicle, and there’s no guarantee this maiden voyage beyond orbit will succeed.

But given Japan’s space aspirations, gambling on Ikaros’s technology is but a small step. JAXA’s ambitions are pretty aggressive in the near term in stark contrast to the U.S.’s long-term space exploration approach recently detailed by President Obama. The same rocket that carries Ikaros will send Japan’s first satellite to Venus as well, and JAXA plans to land a wheeled exploration robot on the surface of the moon by 2015, adding a moon base inhabited by several wheeled robots by 2020. The country plans to spend at least 2 billion dollars on its lunar ambitions over the next decade.