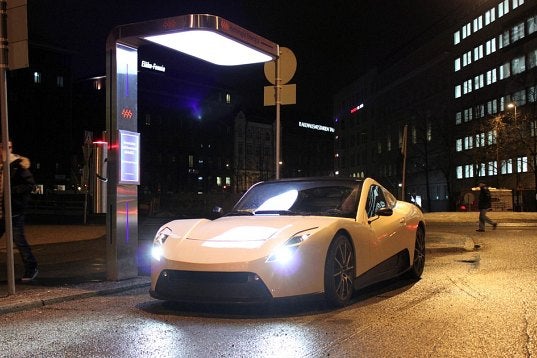 Hybrid and even all-electric sports cars have become the rage as of late, but how many of them can recharge their lithium-ion battery in as little time as a pit stop at the gas station? Meet Finland’s electric RaceAbout, an all-electric sports car that has its sights set on the $10 million Progressive Automotive X-Prize, according to Inhabitat.

The four-wheel drive RaceAbout features a 124-mile (200-km) range and can fully charge in just 10 minutes. Its chassis also weighs half as much as similar-sized cars, in part because the direct-drive electric motor eliminates heavy gearboxes. The vehicle also incorporated other lightweight materials and technologies.

RaceAbout came out of the Helsinki Metropolia University of Applied Sciences, but also received help from many Finnish companies. It’s just one of 44 teams scheduled to compete in a “shakedown stage” of the X-Prize at the Michigan International Speedway this April.

A final winner will emerge in September for having developed the best production-capable electric vehicle that exceeds 100 MPG. But anyone tired of just being a spectator can already place orders for electric sports cars that get to 60 MPH in five seconds.