Is the World’s Most Intelligent Music Composing Software as Creative as Bach?

If the thought of a Wiimote-controlled robot drum circle sounded vaguely disturbing, prepare yourself. This month, composer and software developer... 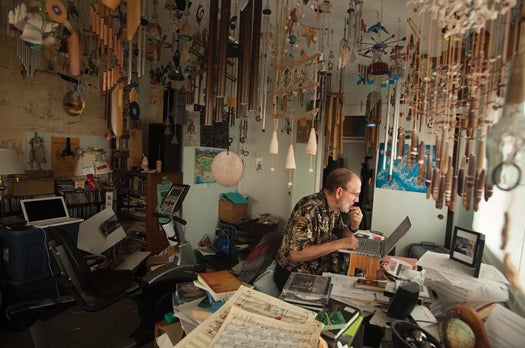 If the thought of a Wiimote-controlled robot drum circle sounded vaguely disturbing, prepare yourself. This month, composer and software developer David Cope is set to unveil the first musical works composed by his latest creation, dubbed “Emily Howell.” Emily is a piece of software that many see as the most advanced artificially intelligent music composer. The program is already stirring fierce debate over its supposed ability to generate creations indistinguishable from those composed by the masters–Mozart, Bach and the gang. Miller-McCune went in-depth with this strange and fascinating tale of creativity in the age of artificial intelligence.

Cope first turned to artificial intelligence after experiencing a bad case of composer’s block that prevented him from finishing an opera commission. That led to the creation of a program called Emmy, which could effortlessly replicate the style of Bach or other great human composers, cranking out more compositions in one afternoon than any human could produce in one lifetime.

Emmy infuriated critics and music-lovers alike, especially when Cope asked an audience to distinguish between real Bach and Emmy-composed Bach and few could hear the difference. But many researchers hailed Emmy, and some even suggested that it had successfully passed some level of the “Turing Test,” because people couldn’t differentiate its artificial work from that of humans.

Still, even some of Cope’s supporters admit that Emmy disturbed them with its implications. Cope designed Emmy to work based on his view that all music — or any creative venture — is based on previous works. The idea that human creativity is just a product of recombination has upset some musicians and artists (and humanists), despite the idea having a certain cold logic.

As Cope suggests, even the most revered music composers must have created their works based on the conscious and subconscious mind’s interpretations of previous music. He drove home that point by using Emmy to reverse-engineer the works of famous composers, tracing their component elements back to earlier pieces of music.

The daughter program of Emmy, dubbed Emily Howell, takes a more cooperative approach with Cope rather than simply churning out new scores based on recombination algorithms. Cope and Emily Howell engage in a musical conversation involving certain compositions or statements, where Cope will label certain musical statements “yes” or “no.” That trains the program to refine its composition approach, and eventually it creates its own, Cope-styled original music.

Critics have remained unconvinced, despite the fact that many still can’t differentiate between Emily Howell’s work and that of a human. For instance, one music-lover who listened to Emily Howell’s work praised it without knowing that it had come from a computer program. Half a year later, the same person attended one of Cope’s lectures at the University of California-Santa Cruz on Emily Howell. After listening to a recording of the very same concert he had attended earlier, he told Cope that it was pretty music but lacked “heart or soul or depth.”

Emily Howell has an upcoming album, but you can already here some short samples of its robotic genius (?) in the Miller-McCune story. Did we mention that Cope has also signed a confidential deal with a well-known pop group to write songs for them? Sound off below and let us know whether you buy into this future of music and art, or whether this AI composer just doesn’t wash.