Today’s solar power plants work either through photovoltaics or heated steam. If Enviromission gets its way, tomorrow’s plants will combine... 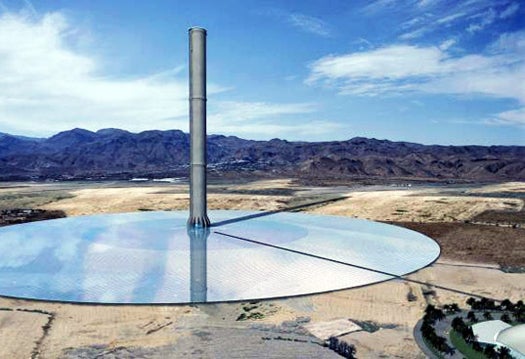 Today’s solar power plants work either through photovoltaics or heated steam. If Enviromission gets its way, tomorrow’s plants will combine wind and solar, with acre-sized mirrors and multi-thousand-foot-tall chimneys generating turbine-spinning gusts. The technology’s called solar updraft, and a $750 million, 200-megawatt project may just bring Enviromission’s future into the present.

The plants work by generating pressure differentials between warm and cool air at the surface. Four acres of solar panels sit around a 2,400-foot-tall chimney, and above turbine-laden tunnels. The panels heat the air closer to the chimney far faster than the air at the ends of the tunnels. The warmer, less dense air then serves as a partial vacuum, drawing in the colder, denser air at the edges through the tunnels fast enough to spin the turbines and generate electricity.

Solar updraft technology first broke onto the scene in the 1980s, but this is the first time a company has made a serious go at it. So far, Environmission plans to build two towers in La Paz county, Arizona, and California has cleared Enviromission as a power provider, but has yet to fully sign off on solar updraft technology as method for generating electricity.