The First Martian Weatherman Forecasts Conditions on the Red Planet

While much of the scientific community ponders the possibility of life on Mars, Atmospheric Sciences Professor Istvan Szunyogh of Texas... 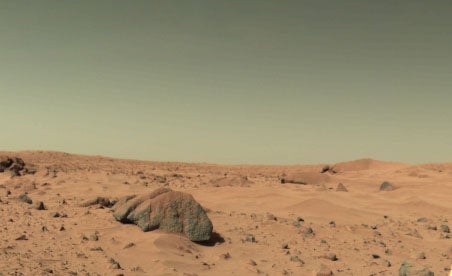 The Martian atmosphere can be as brutal as the landscape; now NASA has recruited a team of researchers to forecast the weather on the Red Planet. NASA
SHARE

While much of the scientific community ponders the possibility of life on Mars, Atmospheric Sciences Professor Istvan Szunyogh of Texas A&M University is more concerned with finding out if there is “weather.” While the Red Planet’s thin atmosphere (only 1 percent the density or ours) means there isn’t weather as we experience it here, we do know that there are clouds, extreme temperatures, strong winds and dust storms that make the worst on Earth look tame by comparison. As such, NASA has awarded a grant to Szunyogh and a team of other researchers to analyze and forecast those conditions.

Weather forecasting here on Earth is a tricky business, so forecasting the whims of the Martian atmosphere will be no easy task. While Mars is the planet most like Earth that we know of, it is still a very different place. Its ice caps are so cold that they are covered in dry ice (frozen carbon dioxide), and the planet-wide dust storms that occur every two to four Mars years cover the entire planet with dust for months at a time.

Knowing what’s happening when on the Martian surface can be the difference between successful unmanned — and eventually manned — missions to our planetary neighbor. For instance, the two rovers now exploring Mars run on solar power. A massive dust storm can block the sun and cripple their ability to recharge their batteries, while high winds can help blow equipment clean so they can continue to operate.

Szunyogh and his team will build their models much as meteorologists do here on Earth, gathering as much data as they can on the physical parameters of the Martian atmosphere from remote observations and feeding that into global circulation models that will help foresee what weather variables will be coming down the road.