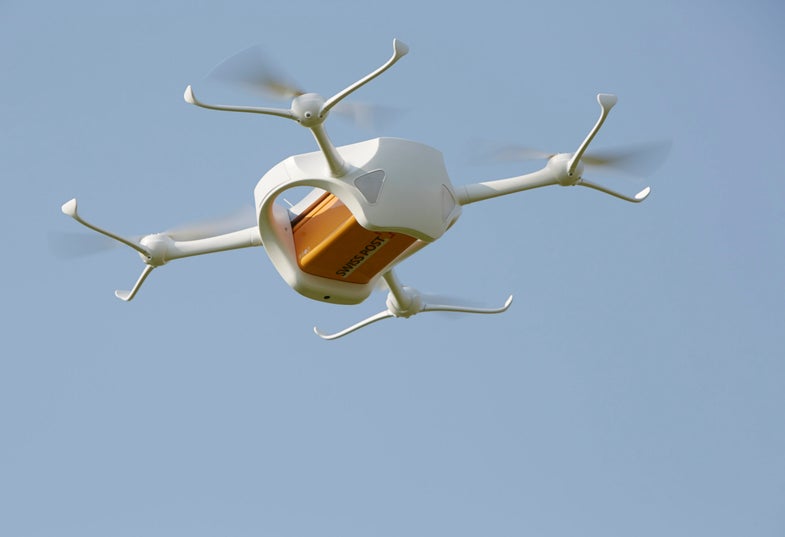 Watch the test flight below:

Drone delivery service has become a topic of intense interest among companies around the world in recent years, most notably Amazon in the U.S. The Swiss postal drone is, like many delivery drones before it, a quadcopter. Specifically, it’s the Matternet ONE drone, which is specifically designed for cargo: no strapping on special hooks or adapting a camera copter to lifting here. Instead, Matternet ONE carries a box big enough to fit a couple apples in its hollow core. For delivery, the drone lands and then has the receiving customer open the box, which is probably wise but misses the midair theatrics of burger bombing.

Swiss Post isn’t promising a full revolution in delivery yet, but rather cite the drones as the latest in a long line of technologies that are well suited to the varied terrain of the cantons. In a release on the drone test, the Swiss Post notes that from horse-drawn carriage through electric cars, they’ve adapted to both technology and the difficult land, also citing the use of a sledge for some deliveries in winter.

Rather than plotting a world-conquering delivery plan, the Swiss tests are aiming for some simple objectives, centered around highly critical deliveries, like medicine. From the release:

Keeping with the modest goals of adding drones into an already-functioning postal system, the Swiss don’t expect to see postal drones flying around the Alps until at least 2020.