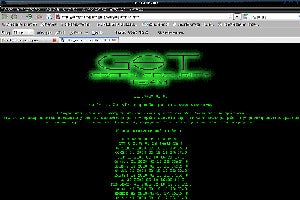 I’m in Ur System, Greeking Ur Site

Last Wednesday, after years of construction and months of planning, the Large Hadron Collider, which you just might have heard about, turned on its proton beam for the first time. At the same time, a team of Greek hackers was planning to break through the security of the world’s largest experiments. First reported by the British newspaper the Telegraph, the attack targeted a project website, defacing the website with a long message in Greek.

“Overall, it wasn’t very dramatic,” said LHC spokesman James Gillies, “One person’s account was compromised. It was detected rather rapidly and dealt with, and it was nowhere near the sensitive machines running the LHC.”

The hackers, who called themselves the “Greek Security Team”, attacked a website related to the Compact Muon Solenoid experiment. The website, which Gillies would neither confirm nor deny to be password-protected, relayed data from the experiment and was not designed for public view. Since the attack, the website has been moved within the same firewall protection that protects more important systems.

While the hackers did fail to damage any programs critical to the operation of the LHC, it is not clear whether or not that was their intention in the first place. The Greek message that replaced the website claimed that the attack was conducted to alert the security personal at the LHC to the vulnerability of the system before more malicious hackers could do actual damage. To this end, the hackers actually succeeded, as the LHC has since tightened up its online security.

“We are 10,000 scientists, 500 institutions, 80 countries, and network security is something we take seriously,” said Gillies, “this kind of thing keeps us on our toes.”

Yet despite their claims of magnanimity, the hackers almost certainly launched their attack for publicity. Penetrating a computer system run by the world’s foremost scientific minds is akin to winning the Kentucky Derby on a mule, and the hackers sent out a press release about the attack to several journalists to publicize their attack.

In the end, the attack just became another story distracting from the activation of the proton beam. Reports of the hacker attack, along with similar news stories about the possibility of the LHC instantaneously destroying the world, took up almost as much space as stories about the successful test of the machinery. However, since the world was not destroyed and the defaced website is back up, maybe the reporting will begin to focus on the physics again.