Some helpful bots debuted at CES 2021. 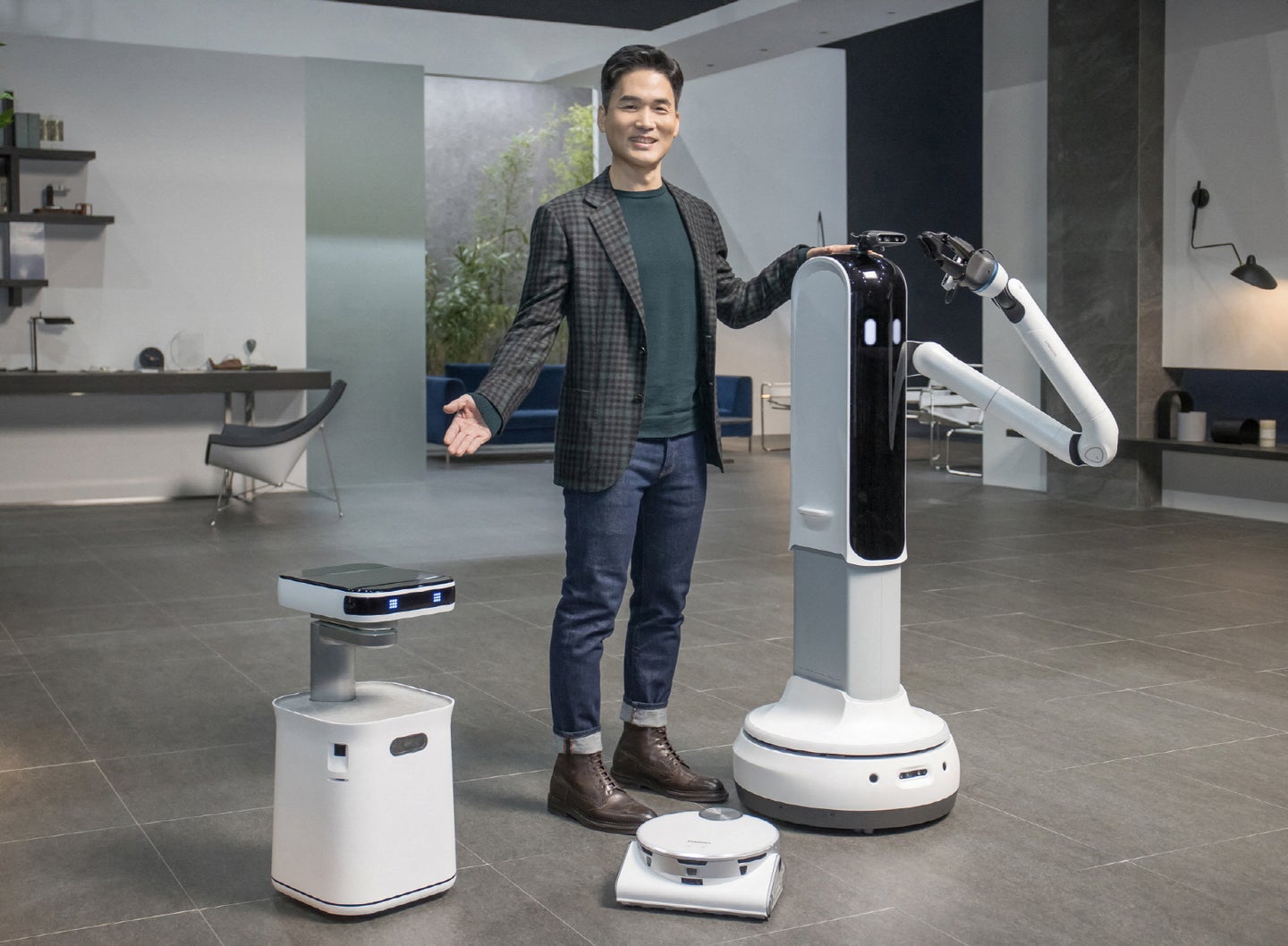 He could make a huge mess and those robots would clean it, but they would also judge him for it. Samsung
SHARE

Imagine a robot the size of a kitchen trash can is rolling around your home, nagging you to get off the computer and go outside before you get into the fourth hour of watching Twitch streamers open old packs of Pokemon cards. Then, a different robot sets a table for a nice meal before doing the dishes. That’s the future Samsung envisions with its new robotic concepts on display at the virtual CES.

Samsung is showing off a new version of the Bot Care robot, which debuted last year. This new iteration looks vaguely like a robotic E.T. and it’s meant to act as a personal assistant. Using computer vision, it can literally watch how you behave and provide feedback and tips on how to get more physical activity. Presumably, like the previous version, it would also be able to recognize if you were having a serious health issue and alert emergency services or family members. It still needs to roll around your home to move, however, so you can always hide in the basement to mask your shameful habits while it stands at the top of the stairs and yells, “Are you eating Oreos down there again?” It won’t really do that, but maybe the CES 2022 version will.

This new robot has an extendable arm with a gripping mechanism on the end that allows it to move objects around. The video demo shows it loading the dishwasher and pouring a glass of wine. Its built-in display also gives it a cartoon-like face that it can use to wink at you after it’s done its chores, which I hope you can turn off because I don’t need a robot condescending to me in my own home.

Earlier this year, Toyota showed off a robotic butler concept, which involves suspending several robotic arms from a support system built into the structure of the home. Like the Samsung example, Toyota’s bot was still just a concept, but it’s nice to know that companies are hard at work trying to make machines to do our dishes—that really would have come in handy during the pandemic’s never-ending cycle of cooking and cleaning at home.

Lastly, there’s a new automated robotic vacuum designed specifically for people with pets. The JetBot 90 AI+ has both 3D sensors and built-in lidar like a self-driving vehicle to guide its course around your house. It has an intel-based computer vision system onboard that allows it to identify objects on the floor as small as 5 nm. Plus, it can actually analyze the objects and use that information to guide how it reacts. If it’s a piece of pet food, it will soldier on and suck it up. If it matches the profile of your pet’s poop, it will avoid the feces and prevent a gross catastrophic mess from spreading across the entire floor.

The built-in cameras also allow people to monitor their pets from afar via an app. And because the computer cameras have facial recognition, they can tell when a stranger enters the house and alert the user with a notification.

Postscript: At last year’s CES, Samsung showed off an adorable (but limited) rolling robot called Ballie. While it couldn’t do any household chores, it did have an AI-powered camera onboard, as well as the ability to act like a rolling smart speaker that could control other smart home devices via voice commands. Of course, Ballie was just a concept back then and it doesn’t seem as though the little thing has gotten anywhere closer to becoming a real product. It will always live on in our memories and our old CES coverage articles, though.