Your Guide To Following The Iranian Election Protests Online 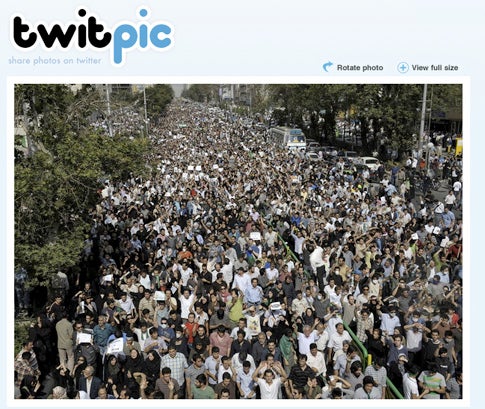 As you have heard (by now, ad nauseum), the protests surrounding Iran’s troubled and disputed presidential election this past Friday have highlighted how technology and social media are redefining the way moments of mass political unrest are reported, live. Instead of watching CNN, you can observe the same on-the-ground reporting–all in real time–that the CNN folks are watching and then passing on to you. Here’s where to find it.

Beginning with opposition candidates harnessing social networking to get out their message rather than using biased state run media, to allegations of SMS services cut-off hours before the polls opened, to current and constant live updates of the protests and marches around the country at this very moment, social media tech has been a major factor in just about every aspect of this story:

• Twitter’s #iranelection topic. Anyone tagging their tweets with “#iranelection” get filtered in here, including posts “retweeted” by others around the world. A live counter updates how many new posts have been added since you last checked–the pace is staggering.

• Iran Unrest takes all of #iranelection tweets and allows you to sort them by popularity (number of times they’ve been reposted by others), frequency, etc. This is a good way to filter down to the those actually doing the reporting. It also updates in real time.

• Another site compiles a list of Twitter users that have posted from Iran within the recent hour.

• There is also #CNNfail, a trending topic which is worth following, which was a reaction to major US news news networks’ tendency to report on people in Iran using Twitter without really listening to what they were saying.

• Many groups have popped up on Facebook that allow members to post pictures, video, and organize protests or meet-ups. Currently the search term “Iran Election” or “Iranian Election” has 153 different groups established with various amounts of membership. And those are only the ones translated into English.

• Stunning first-hand videos of the protests are being posted under the Mousavi1388 channel page, operated by “a group of Iranian professionals and students who believe that the up-coming presidential election in Iran is a highly important event and a chance for us all to change Irans current position within the world.”

• Huffington Post
A live-blog update of events occurring around Iran, aggregating info from several journalists and news outlets, as well as on-the-ground reporting.

It’s an exciting time–seeing these modern tools making things possible that never were before. Feel free to drop any additional links you’ve found in the comments.