Speck of a Motor

An engine for running medical microbots

Doctors have miniaturized almost everything they need to send robots inside your brain’s blood vessels to treat damaged tissue. But making a motor small enough to squeeze past blood cells has held things up. Now, engineers at Monash University in Australia have built a micromotor that brings bitty ‘bots closer to reality.

Shrunken versions of standard electric motors, which use spinning magnets, have traditionally lacked power or required a bulky gear box to prevent them from spinning too fast. So the Monash engineers decided to power their 0.14-inch-tall motor, called Proteus, using reverse piezoelectricity — a phenomenon that converts an electric charge into motion — which lets it maintain power and run at a reasonable speed at any size. An electrified ceramic element oscillates up and down, twisting a springlike rod that turns a tiny ball. The ball’s rotation could then spin a flagellum to help a robot swim. 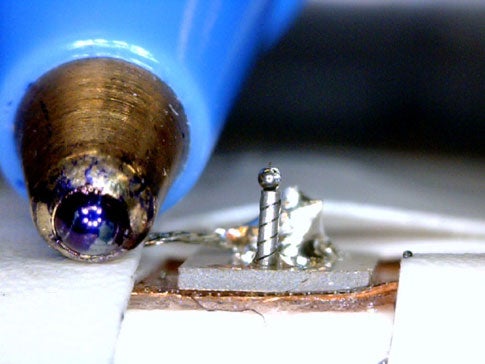 The 0.14-inch-tall motor nearly fits on the tip of a pen

The group plans to install the motor in a robot, test it in artificial blood vessels and, by next year, further shrink Proteus to 1/300 the size of an ice-cream sprinkle. Making the minuscule pieces won’t be a problem, says Brett Watson, a member of the Monash team, but he says patience is key: “It’s really hard to put the darn thing together.”